"I am delighted and grateful that Member States have adopted a resolution officially designating November 19th as World Toilet Day."

Not words you hear from a world leader every day! It's a small step for a man and a giant leap for (hu)man kind. In fact, the resolution goes farther than just adopting the day: The United Nations has adopted Singapor's "Sanitation for All" resolution, working with the government of Singapore on a "crucially important global issue": The need for all human beings to have access to basic sanitation. It is one of the most difficult and yet most important points on the UN's Millenium Development Goals.

Lack of basic sanitation is more deadly than most of the other hot topics of today. The numbers are so large they are quite difficult to conceptualise. 2.5 Billion people lack access to the basic sanitation. That doesn't mean that they have a squat toilet, or a non-flushing toilet: simply lacking the comfort that most reading this blog take for granted. It means they have no toilet. For 1.1 billion it means open deification. Both personal dignity and personal health are at risk. When there is no structure for sanitation the water and food supply are contaminated, leading to severe health problems. Diarrhoea is the leading cause of death among children under 5, with an estimated death rate of 750,000 every year (that's 2000 every day!) You can read about this in lots of places, and I'm sure I'll get into it more here later on, but for now I'm interested in getting back to this one event: World Toilet Day.

George Bernard Shaw's quip that "decency is indecency's conspiracy of silence" still rings true more than a hundred years later. This is why, despite the astronomical numbers, we're much less aware of the toilet crisis than aides or malnutrition or war. There are too many social barriers about what we don't like to talk about. Chances are that the idea of World Toilet Day makes you giggle. And to be honest it makes me giggle, though I take the issues around it quite seriously. And I think that is a good thing. If it accomplishes that, then that is the first step towards engaging people, and perhaps tricking them into a more serious engagement. So the day is a chance to talk. The official WTD website says:


World Toilet Day is not just about toilet humor, or an attempt to make toilets sexy. World Toilet Day has a serious purpose: it aims to stimulate dialogue about sanitation and break the taboo that still surrounds this issue. In addition, it supports advocacy that highlights the profound impact of the sanitation crisis in a rigorous manner, and seeks to bring to the forefront the health and emotional consequences, as well as the economic impact of inadequate sanitation.

World Toilet Days′ vision is to grow as a collective campaign uniting on 19 November everybody who is passionate about toilets to ensure that access to proper sanitation, which has been declared a human right, becomes a reality for all. 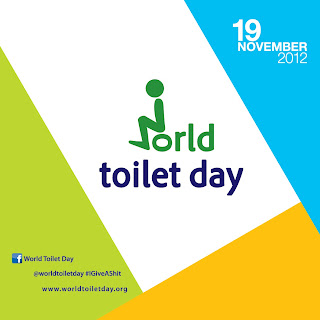 Posted by Rachel Erickson at 4:23 PM