Art in the Loo 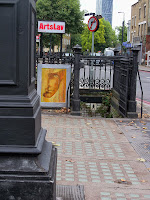 For the last few months as I took the 159 to and from Central London an underground toilet in Kennington caught my eye. I notice toilets in any case, but this one was special because of the bright red sign outside reading 'Artslav'.

The local community has taken on the project of restoring it as a community arts and exhibition space, and I have been waiting to find out what it would be like. This weekend was their opening event, with an exhibition by Ryszard Rybiki. So this morning, after a fairly late start I headed down the ivy covered staircase to see what the space had in store.

Even as underground loos go ArtsLav is relatively small. All the original fixtures have been left in and it still has a grungy newly opened look about it (I mean this in a good way... it's a sense of history and connection to what was once there.)

Potted flowers were placed at the base of each urinal, and candles places on the countertop that has been installed over them (the only significant change to the sanitary fittings) 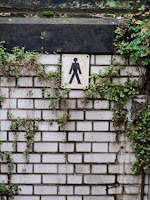 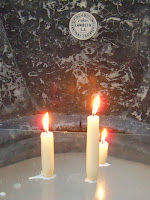 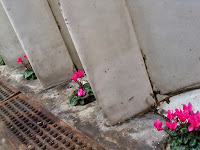 Equally interesting was talking with Ryszard, who is an absolute bundle of energy. I had come in at the same time as another woman, and as I looked around he was interrogating her about her own art. When she said that she was an amateur, he said "nonsense! There are two types of people! There are artists and not artists." With all this in mind I probably should have known better to answer "On occasion" when asked if I too was an artist. He bounced up and down and said "You are either pregnant or not pregnant. You can't be sort of pregnant." I couldn't help pointing out that you aren't always pregnant. "Yes, thank goodness!" We were saved from beating the metaphor to death by the appearance of some pigeons on the screen projecting images from the camera obscura. This excited him too, and he spent a couple minutes filming the screen.

When the pigeons had gone conversation turned to the benefits of the space. He told us about deleting facebook friends earlier that week. "She said 'I hope you find better space for next time. 'I thought... 'I have known you so many years. I never knew you were stupid'" he told us cheerfully.

He went on to discuss philosophy on doctors and art. He believes that doctors are out to get us. While I am not quite as extreme in my beliefs about doctors (when push came to shove I was quite happy to choose being sliced open in a clinical environment over letting a tumor swallow my heart like an Octopus) I do see his point that we should spend more money on champaign and art if we want people to live longer and be happier. "And toilets" I added. He laughed and agreed.

Quite serious on that point, actually, as poor sanitation costs countries up to 7.2% of their GDP annually. Read a statistic just this morning that access to better toilets would clear about half the hospital beds in Africa (http://www.unmillenniumproject.org/documents/TheLancetWater.pdf)

I left him with my business card, a quick explanation of my interest in the history of Loos and a promise to do some morris dancing at his next charity auction. 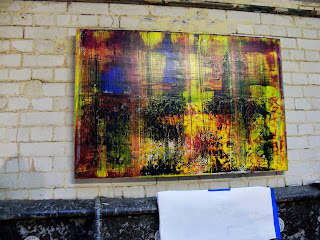 One thing I learned from talking to Ryszard is that the venue still deals with issues of people thinking it is an abandoned toilet and throwing rubbish down the steps. In this sense it represents both the best and worst of what a public toilet can be. Ideally it is a communal space where people can come together to fulfill basic life functions. A sanctuary and a retreat. We have a lot of words to express this: 'restroom', 'retiring room', 'powder room' 'convenience.' Unfortunately many people simply see toilets as a place for waste (human or otherwise)... an outcast undesirable place worthy of little to no respect. It's a self-perpetuating mentality, as people learn not to respect them, and they are closed down due to vandalism, crime and lack of public will to keep them open.

Maybe the arts are another way into re-training people? If we treated toilets with the reverence we treat our art galleries we might be on to something. Make it welcoming, even participatory (what if we celebrate graffiti as shared expression rather than an annoyance to be periodically cleaned up) 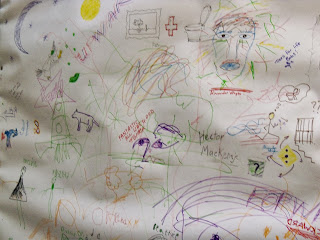 It's a thought worth considering. 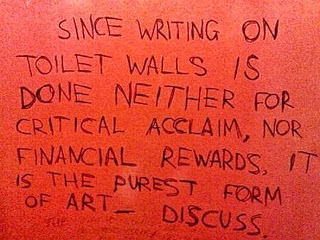 Posted by Rachel Erickson at 2:02 PM