A visit to Crapper & Co.

What happens to the middle of the toilet seat?

Though I have wondered many strange things in my time, this was not a question I had ever thought to ask. But I found out anyway.

I was in the front room of Thomas Crapper & Co in Stratford-Upon-Avon on a sunny Wednesday afternoon. A charming wooden sign with gold lettering above the door caught my attention.

UNACCOMPANIED CHILDREN WILL BE SOLD AS SLAVES. 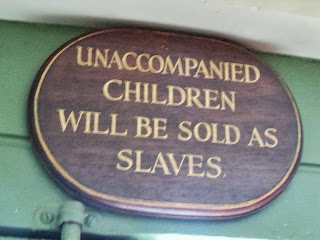 Of course I had to take a picture. As I was riveted on the sign a voice behind me said “That’s the center of the toilet seat.”

The speaker was Simon Kirby, Chairman of the company. As with so many I have met in the industry he was incredibly pleasant and happy to tell me all about his work. His journey started with antiques and history. As a child, he told me his bedroom was a museum of antiques. His mother’s copy of Temples of Convenience sent the interest in a sanitary wares direction, and he began dealing in antique fittings.

He thought of opening his own reproduction company, and found out that Thomas Crapper and Co. was still in existence. It had been fallow for years after having been sold to a rival company in 1963. Thanks to Simon  and a “a small band of enthusiasts” Crapper & Co is once again an independent name, producing reproductions of Crapper’s original designs including the pride in quality.

Quality is all important. There are plenty of replicas on the market that take the external form and look vintage but are, in fact, modern fittings. The vintage plumbing is only skin deep.

In addition to the factory, Simon continues to collect, and took me on a tour of the impressive array of pieces in his showroom. 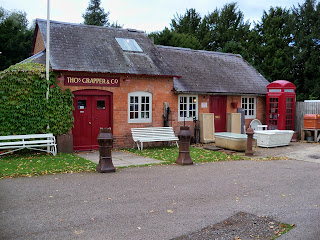 Outside he showed me two urinals, which stand like sentinels on either side of the door. They had the apis (get it?) Having only seen pictures of these particular pieces I commented that I was surprised by how low the target was. He said “well, you’re not going to be aiming up!” Goes to show my grasp of the mechanics of male anatomy is minimal in that respect. Probably just as well. Although they do seem to have a lot more fun when it comes to sanitary wares!
famous insect target: the

The discussion of lack of provision for ladies lead us to the bookshelf, full of catalogues of the fathers of our modern toilet. Crapper, Twyford, and even a rare Jennings. These are not your average modern day bathroom catalogue, but large volumes of beautiful colour-print illustration. They would have been sent to architects or perhaps those with very important addresses. Most impressive catalogue was Twyford’s with its gold embossed pages.

The Jennings catalogue also contained maps of the various underground toilets he had installed. Usually there is at least twice as much floor space allocated to men as two women, and many more toilets when you consider that Urinals take up considerably less space.

The most amazing adventure was the upstairs store-room. The small attic was covered in pieces of cisterns, basins, handles. He had a chamber pot with the famous slogan “Use me well and keep me clean, and I’ll not tell what I have seen.” and another with a caricature of Hitler printed on the bottom. On that theme he also had some art-deco taps, which he told me had been removed from the Savoy in the last remodel because it was felt they too closely resembled swastikas.

A less popular invention by Thomas Crapper: the Bottom Slapper! Today the cry of women everywhere is that men to not put the toilet seat down. The Victorians, it seems had the opposite problem: getting men to lift it up! (Sorry boys… you just can’t win. But give us ladies some slack: We get few enough chances to assert our authority in matters of the loo!) Crapper’s solution was a spring-loaded seat, which went down when sat upon, and then returned to its upright position when done. The invention had one unfortunate flaw. The rubber buffets on the bottom of the seat would become tacky over time and cause it to stick to the bowl for a brief time after the pressure had been released. This caused it to leap up and smack the bare bottom of whatever poor soul had just finished their business.

There was a very early composting toilet: the earthenware closet, with a wooden seat and a pan of dirt underneath.

Possibly my favorite gadget in the whole place was the Edwardian musical loo role. Wind it up and it plays Wurlitzer’s Skaters Waltz as you dispense your paper. That should give those Japanese toilets a run for their money any day!

Most of their sales are through agents and showrooms, so they very rarely get to see where their toilets actually end up. They do supply Jamie Oliver’s Italian restaurants though, with specially branded loos. They also do restoration. They did the underground loos in Cardiff just a couple of years ago, which are sadly currently shut (you can sign the petition to re-open them here) Their products are good enough that they have been mistaken for originals.

I left with a goody-bag full of treats. No toilets. But  two loo rolls in wonderful boxes, a stack of postcards, the current Crapper catalogue and two editions of Flushed with Pride: The Story if Thomas Crapper (The original one and the updated 2010 version with an intro and epilogue by Simon  himself)

In the epilogue Simon tells the story similar to the one he told me in the show room: the childhood interest, finding out the company was still in existence, slowly and carefully acquiring it (There are lots of juicy details in that... but you should really read the book yourself!) Near the end he says:

“A critic could argue that Mr. Crapper was a forward-looking inventor and we should therefore eschew  reproductions and instead produce modern and progressive wears, but we believe the name is now synonymous with the glories of the past. However our long-term plans are to complete our ‘Victorian’ range, then introduce and Edwardian-to-1920’s set, followed by a choice of 1930’s-1950’s Art Deco fittings. After that perhaps we will give the late-twentieth-century designs a wide berth and leap excitedly headlong into the twenty-first century with some truly futuristic innovations. Perhaps.”

I hope they do, as I would love to see what they would come up with. I imagine something with all the grace and beauty of Crapper’s toilets, but an eye to the advances in sanitary reform and plumbing technology. Or microwaves or whatever we have by then.

Having spent the last week discussing very real and often heart-wrenching concerns about the state of toilets world-wide and focused largely on easily implemented low-tech solutions it can sometimes be hard to reconcile this with an interest in the luxury that is a Crapper toilet. What are the ethics of investing in luxury when 2.5 billion people haven’t a pot to piss in?

To me it is this: Thomas Crapper & Co. are a tribute to the original innovators and are keeping a tradition of function and beauty alive. There are few enough of us who are excited about toilets. Perhaps that’s one reason we’re all so friendly: find a fellow sanitarian and it’s like long-lost-family. Toilets like these give us one more thing to get excited about, and open up new markets of people to talk to about the subject. With so much talk about celebrating the toilet and making toilets a sought-after item we need our heroes! And who better to commemorate and hold up as an example of fine plumbing than Crapper who created a brand that is widely admired and respected one-hundred-and-fifty-three years later? 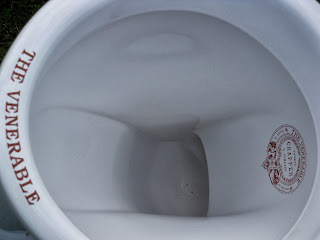 Posted by Rachel Erickson at 3:04 PM