LaviTOURism: A trip to Amsterdam

When you’ve only got four hours in a city you’ve got to prioritize what you want to see. Of course that meant my stopover in Amsterdam focused almost exclusively on public toilets.

I had gone with a particular mission in mind: to visit  2TheLoo, the flagship location for the concept of the ‘toilet store.’

It works like this: You pay a euro to use the loo. On entry you get a voucher which you can then redeem for 50p in the shop out front. The voucher can also be used at a variety of other locations (which for Amsterdam include Madam Tussaud’s, the Amsterdam Dungeons and Shell stations.)

I went in anonymously to start with and paid my Euro for the loo. It was everything it promised to be. I did actually accidentally go in the men’s side to begin with, and quickly realized my mistake. I used the cubicle plastered in images of Nightwatch.

The pros: You are guaranteed a clean plesant toilet (with wifi access, which I am ashamed to admit I may have taken advantage of in order to get my one and only e-mail check of the day… before I actually used the loo, thank you very much!!! There wasn’t any other obvious place to sit and use the free wifi.) Plus it’s entertaining. In the shop you can buy everything from the quirky (toilet brush that looks like a microphone) to the tasteless (toilet shot glasses) to the practical (feminine hygiene products) to the delicious (a variety of sweets, hot chocolate and coffee)

The cons: It ain’t free. Though the fee is comparable to what you’ll find in most other nearby locations. Because of the shop it’s also slightly more confusing of a process. What with taking the ticket as you go through the stalls. The attendant seemed on top of making sure people got that step.

At 4 o’clock I  had arranged a meeting with Violet, the Marketing Executive from the shop. She was friendly as can be, and showed me around all the different stalls, including the family cubicle, which has a child size toilet, a baby change, and… here’s the best part: a disco ball. It also had very large emus on the walls.

Violet told me that they now have 120 stores in 10 countries and are continuing to grow. They are very much about building the brand. The founder, Eric Treuniet, was co-owner of a sports marketing agency, while his partner Almar Holtz was merchandising director for Walt Disney and the big-business background apparent in the mentality behind the shops. They aim big and fun. The stores are generally found at petrol stations, shopping centers and high streets. Shell is a major partner in 6 of their countries of operation. And all because Eric was out shopping one day with his wife and Children in Belgium and struggled to find a decent loo.

I also got to chat a bit with the attendant, who knew his business both with sales and cleaning. Today was a quiet day, he said, with only about 120 people so far. On good days they get closer to 2000.  Loos (like many other tourist attractions) are a weather dependant business.

The attendant talked about the importance of being a friendly face for the shop, making sure that people get into the loos efficiently, and know where everything is. His skill was evidenced by the fact that during the five minutes or so we were talking he still managed to accept payments, return several rogue coupons to their owners, prevent a couple ladies from making my mistake of going into the gents, and wishing everyone “too-da-loo” as they left. George Jennings would have been proud!

In all my lavatorial adventures I have come across nothing else quite like it. But it has been envisioned by others. In the Good Loo Guide Jonathan Routh actually calls for an Entrepreneur like Richard Branson to take the challenge of a high-street chain of shops! Richard Branson hasn’t got there yet (Virgin toilets?) but 2theloo may not be too far from what Routh had in mind. It has character, it is attended, it is clean… everything a toileteer might wish for.

I left with a lot to think about.

I also left with Loois and Looisa, the two plushy dolls who are part of the children’s branding of the shop. Aside from being able to buy them, you can follow their adventures on facebook all around the world.

Mine had breakfast with me on the train to Copenhagen the next morning. 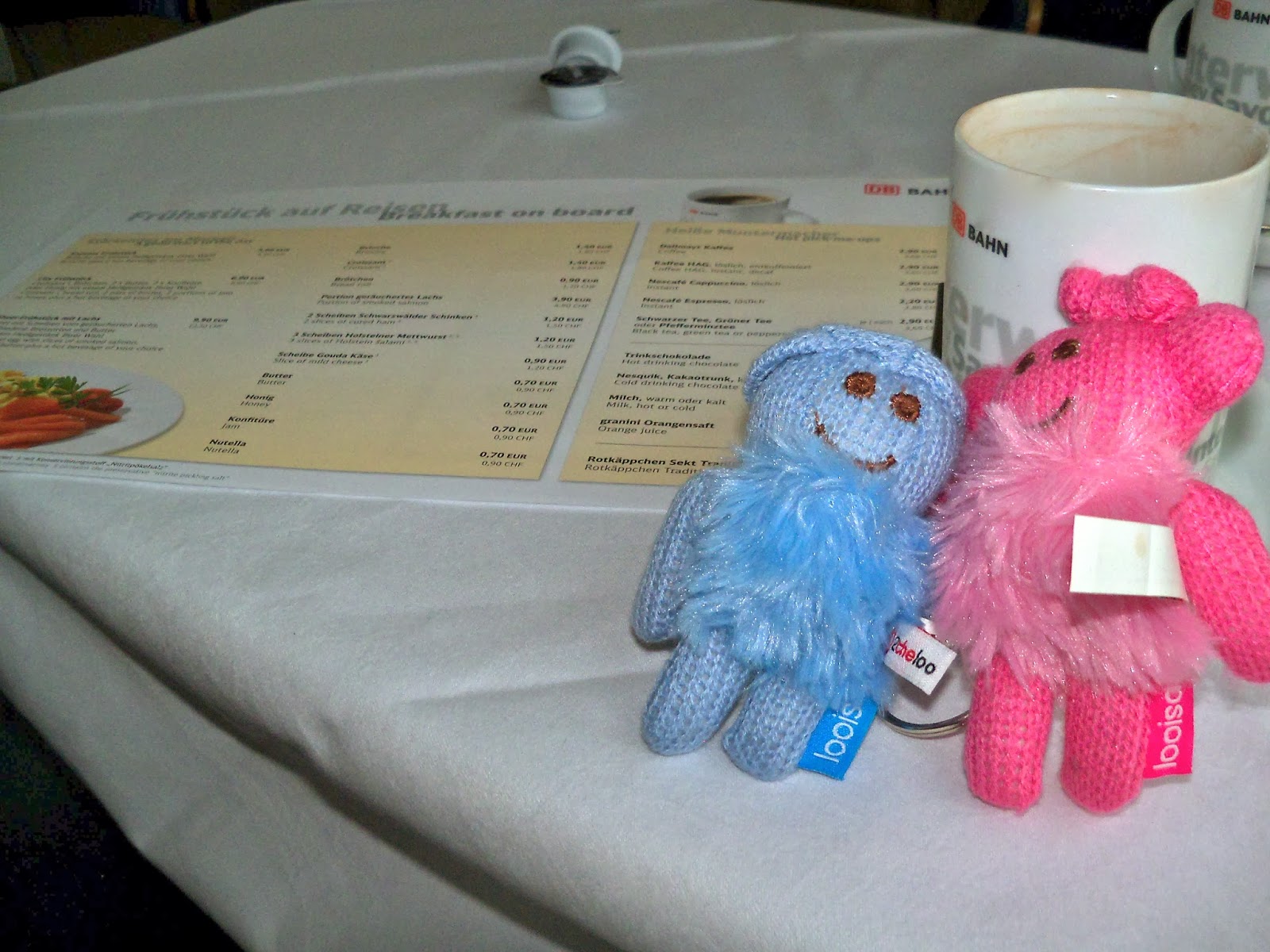 Those two (and the whole concept really) bring me to another potential huge benefit to the model: Familiarity. We look for it in a lot of brands from hotels to coffee shops, which is why international chains are so successful. There’s safety in what you know.

But up until now I know of no other international brand in the public toilet world (manufacturers, yes… but they aren’t the public face… and you wouldn’t decide to go into one toilet over another based on the knowledge that there is an Armitage Shanks vs. a Kholer. ) Some people, especially children, get severe anxiety about using un-familiar toilets. So for them an international brand could mean greater levels of comfort abroad. There hasn’t been a scientific study on this as far as I know. But it would be interesting to see the findings if there ever was!

The rest of the time in Amsterdam I spent looking at what other alternatives the city had to offer. The pickings were pretty lean.

The famous green Urinals, which aren’t much use to ladies. 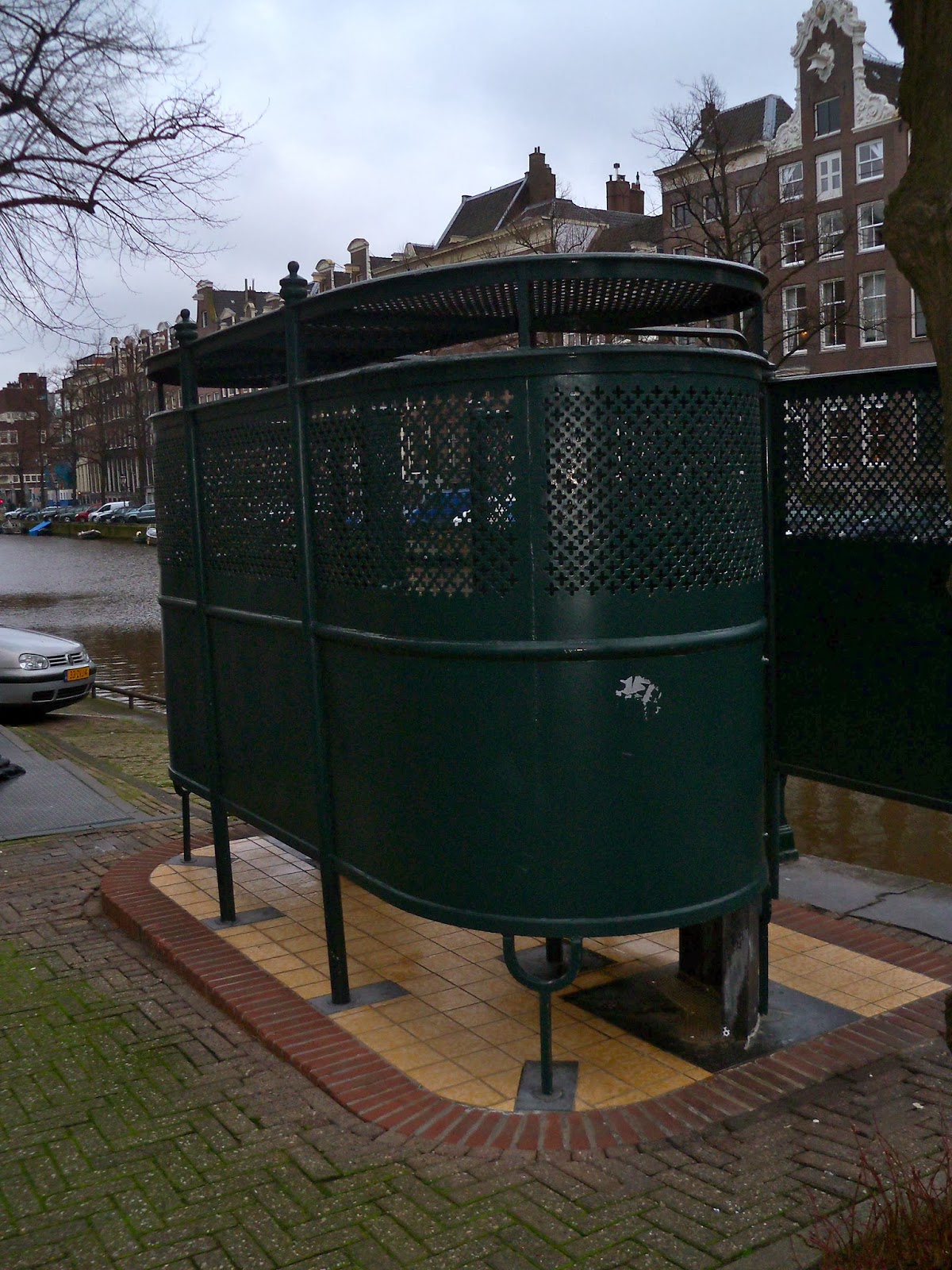 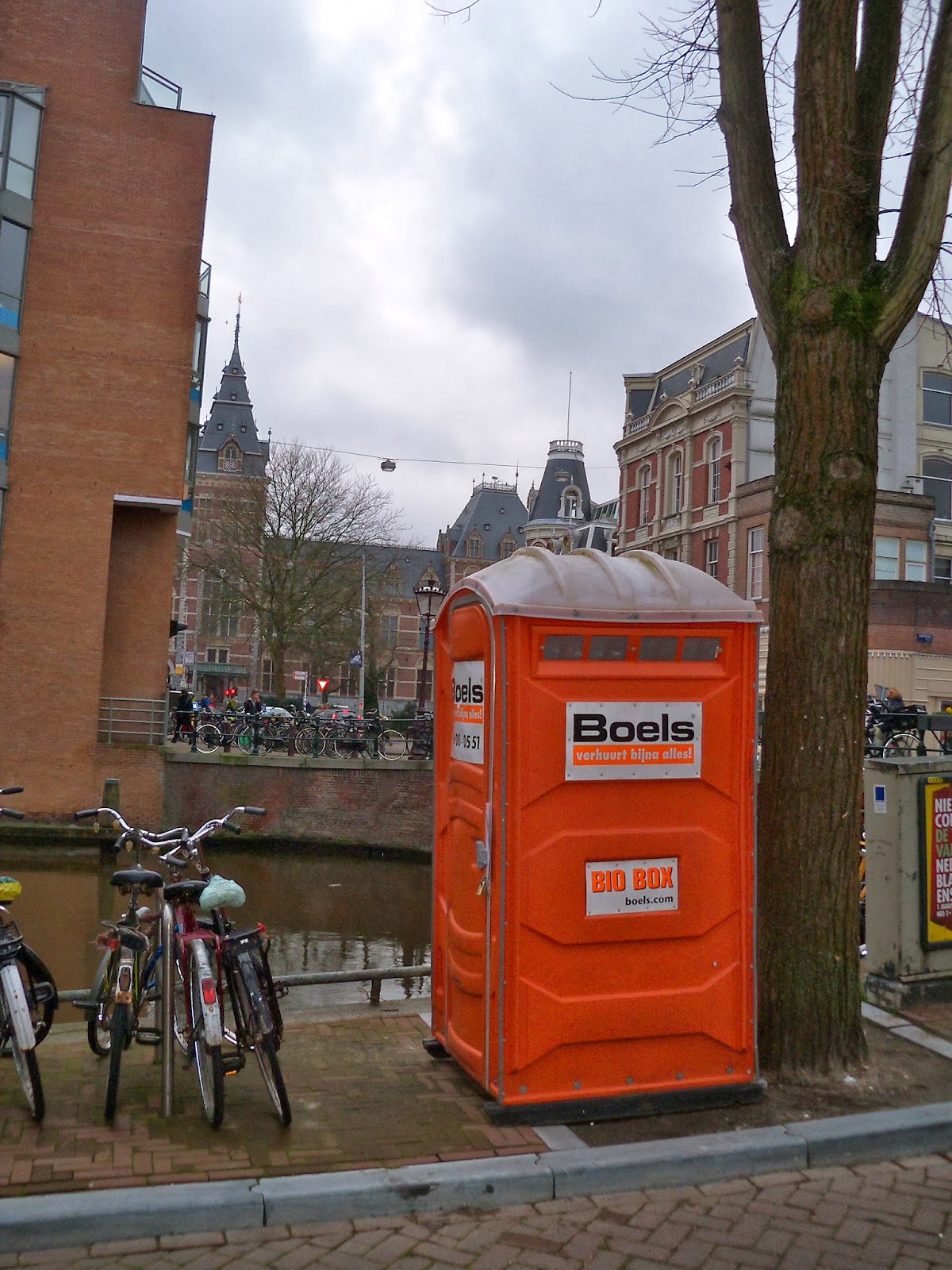 In the shopping center the Loo was through a café and had a 0.40 euro charge. It didn’t look promising enough that I wanted to spend the money. 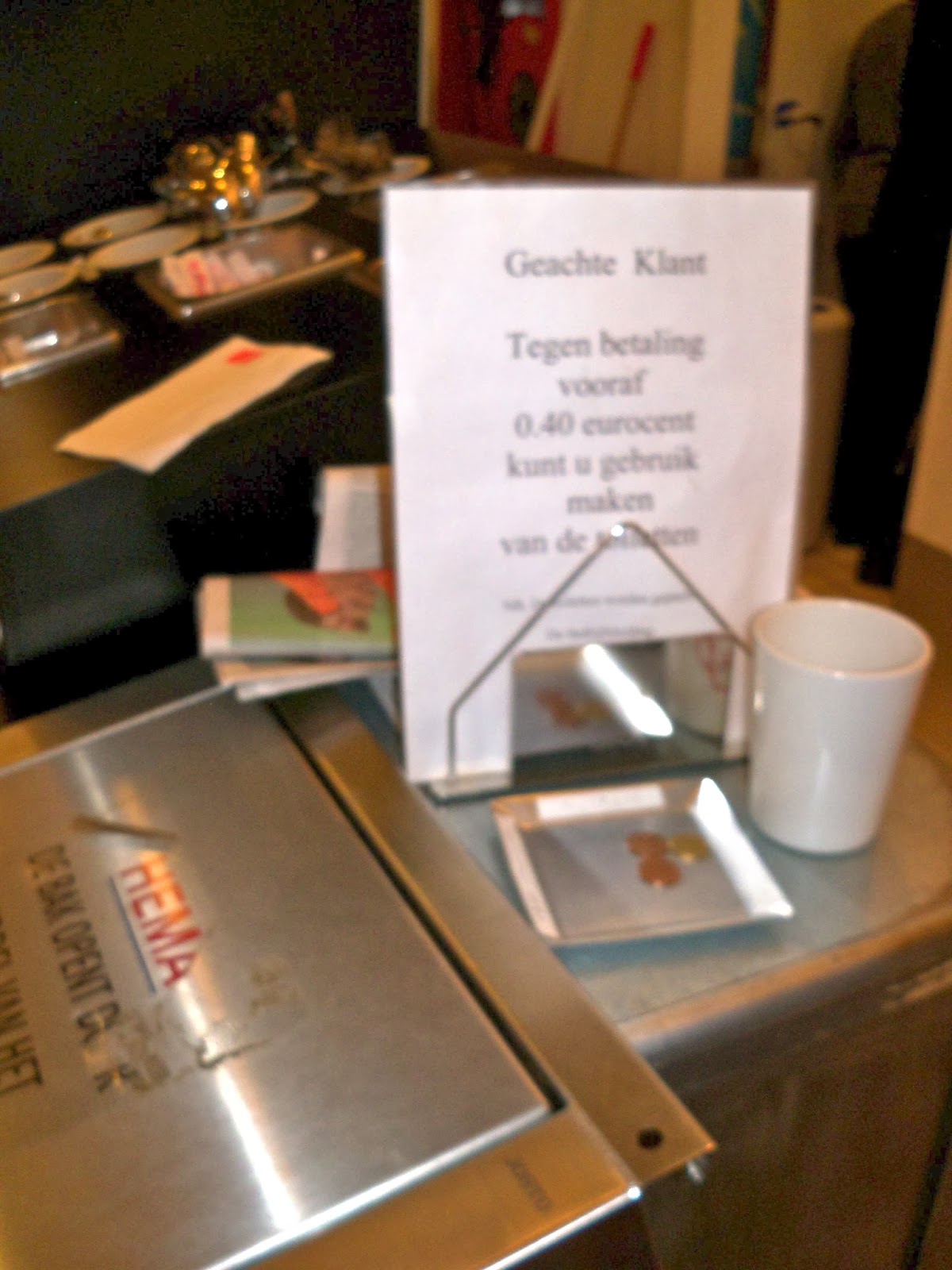 McDonalds had an interesting approach: in the stores that didn’t have toilets they put directions to the nearest one. 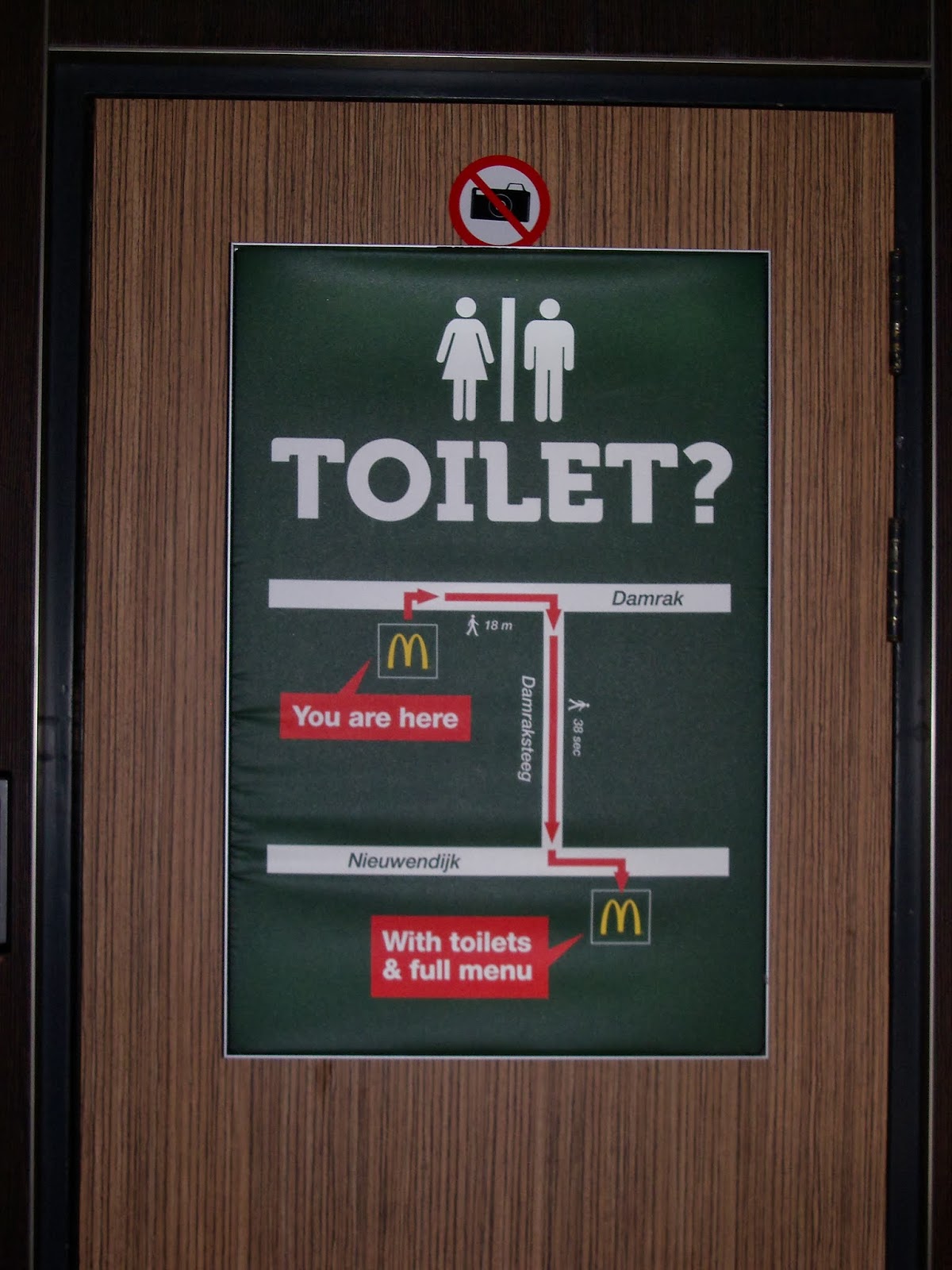 Lastly a non-toilet, but on a related subject I came across a wonderful inscription on an impressive looking archway: 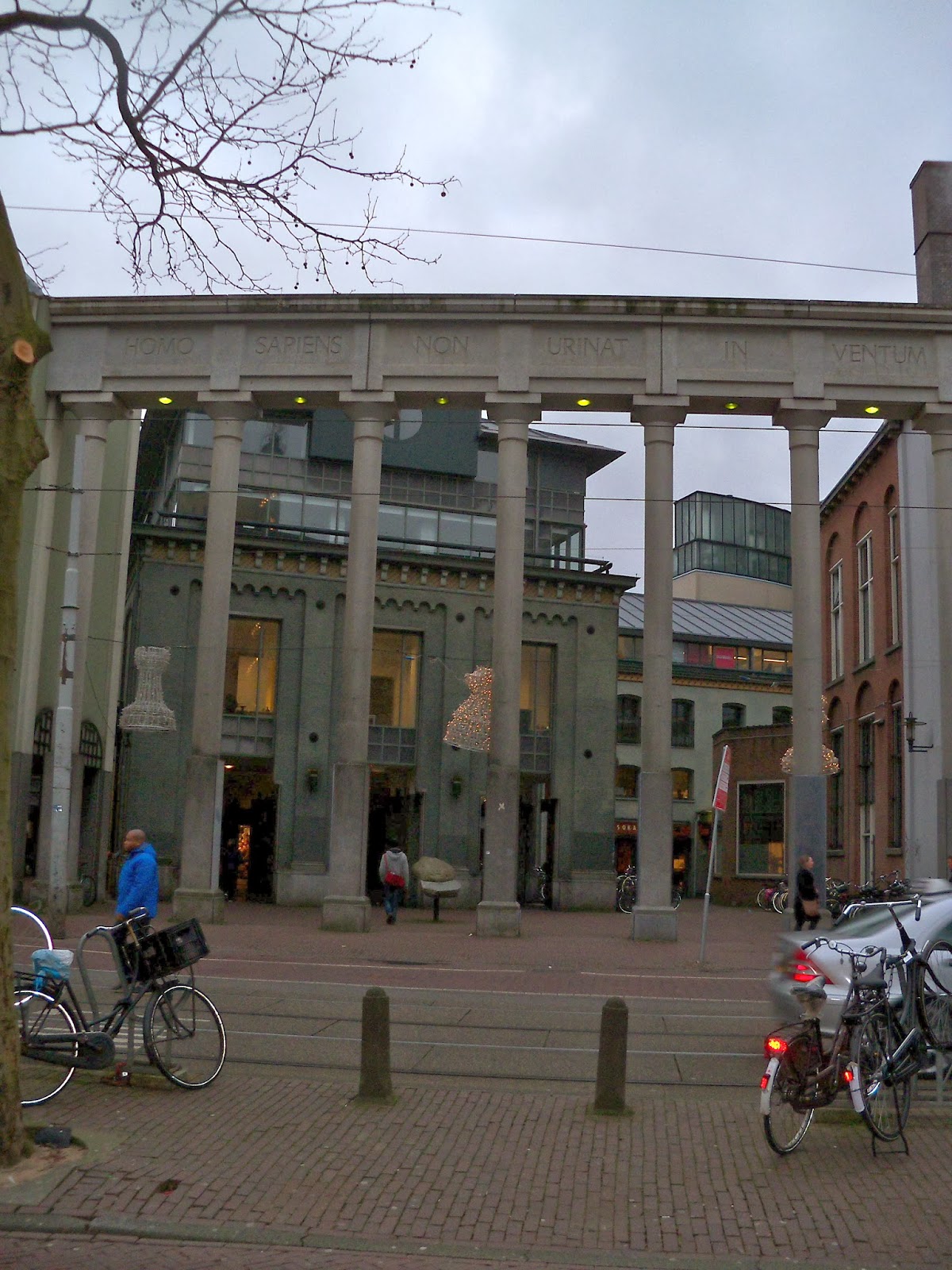 I have the Toilet Guru to thank for this one. His blog offers the story that this was the result of frustration with the beurocracy of city councilors. They decided to add the inscription just to see if it would slip through, and got lucky. Who knows if it’s true. In any case, it is a lovely monument!

My one regret of the trip is missing the loos at Homegrown Fantasy Café, which reportedly are florescent. It wasn’t open when I went by, and I had some trepidation about going into an establishment  which deals primarily in substances of which I don’t partake, so I chickened out on going back later. Probably my loss.

But maybe that is something to keep on the list for next time (along with all the museums that I missed!)  To mis-quote Aussi (hair products): "there's more to life than toilets... but they're a good place to start!"

A Postscript: Eric Treurinet tragically passed away in a car accident several weeks before my visit to Amsterdam. One of the many memorials to him can be found here.
Posted by Rachel Erickson at 12:19 PM