An Adventure in Victorian Sewage 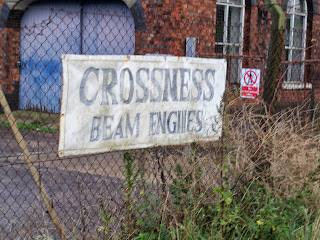 The Crossness Pumping station is one of London's hidden gems of Victorian Engineering at its finest. Several times a year they have a steaming day where they turn on the mighty Beam Engine that once pumped 12 tonnes of sewage with every rotation. It rotates 11 times a minute. You do the maths! It doesn't pump anything any more, but is still magnificant to watch.

On Sunday I headed out (via shuttle-but from Bexleyheath Station) to see the place for myself. 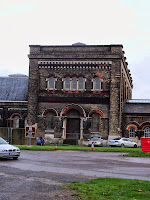 If you're not familiar with what a pumping station is simplest terms in which I have heard it explained are as follows:

For sewage to get to its final resting place gravity needs to do its thing. But there's only so far down you can go. So if it has a long journey it needs to be brought back up so that it can go down again.

Not being an engineer that's about as thoroughly as I understand the concept myself, so the rest of this explanation is compiled at great pains with help from my engineer friends, the Trust's website. If you want to nerd out over a more thorough description, check out the history section of Crossness.org.uk

When you visit, you enter a large hall, which on this occasion was full of exhibitions for a local fair. Volunteers in costume (ranging from proper Victorian to a pastiche of Steam-Punk) were everywhere.

The most impressive site for any visitor  is the Grade 1 listed Beam Engine Room. Beam engines, I was told, are a bit of a lost art. They just don't make them like that anymore. The four at Crossness are (possibly) the largest remaining in the world, with 52 Ton fly wheels, and 47 Ton beams. It's all diesel now. they actually have a diesel engine room next door, but those are sitting unloved at the moment, as they aren't vinage.)

The Prince Consort Engine has been restored, and is the one that is used on steaming days. I had the great honour of getting to turn it on. This involved flipping a switch at just the right moment, under the instruction of a top-hatted gentleman and then rotating a large wheel 2 and a half times. Actually apparently you can do it much more practically with a much smaller wheel, but that looks less impressive in photographs, so the wheel is very much for the benefit of visiting Royalty. This means I have touched the very same wheel as Prince Charles... but any royal DNA has probably rubbed off of me by now... I contemplated never washing my hands again, but given the environment that didn't seem a good idea. 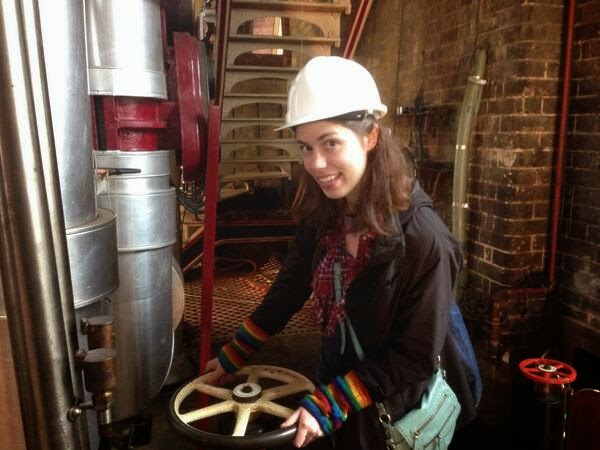 It's actually not just Prince Charles... there are a long line of illustrious folk who have graced the engine room with their presence. According to the website:

The Southern Outfall Works, as the complex was originally called, was officially opened on April 4th 1865, by HRH The Prince of Wales (later Edward VII), attended by Prince Alfred, the Duke of Cambridge, Prince Edward of Saxe-Weimar, the Archbishops of Canterbury and of York and the Lord Mayor of London, and many other persons of rank.

Following an address by Joseph Bazalgette, the Royal party toured the works and reservoirs, and the Prince then turned the wheel which started the engines and, as the Illustrated London News observed, "a sensible vibration was felt throughout the building, showing that the enormous beams, lifting-rods and flywheels were in operation" Following that, in the true Victorian spirit, the "Prince and five hundred guests sat down to an excellent dejeuner, in one of the ancillary sheds, beside the Engine House" (now the Fitting Shop). 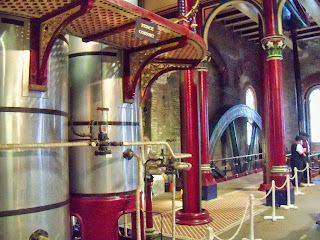 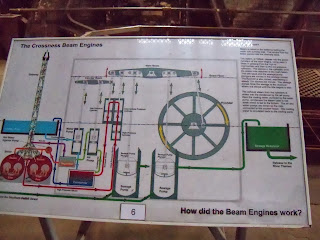 Even for those who don't know or care about engineering the room is worth a visit for the sumptuous decoration. Stunning cast iron work and motifs of daisies and figs are all around, draping themselves over the regal red and gold lattice-work. The figs are a bit of a joke actually... they are one of the best fruits to ease the opening of the bowels. Yet another example of the wonderful comedy of Victorian decency loosely masking a very shrewd sense of humour. 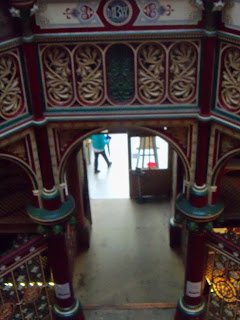 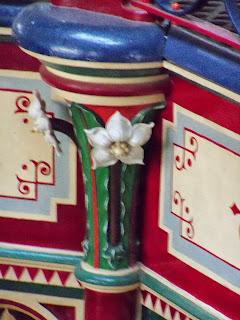 Unfortunately, though the exteriors are gorgeous, less attention would have been given at the time to what went on inside the pipes in the 1800's. The concern of the time was getting raw sewage away from the population of London, as a response to the Great Stink of 1858. But they hadn't got as far as treating it, so the raw sewage still made its way back into the river. Sedimentation tanks were only added in 1891. The reservoirs emptied with the tide of the Thames and carried off out to sea. Thanks to advancements in regulations and technology water is now cleaned much more thoroughly and is much safer (they say our drinking water has been through at least 7 sets of kidneys before it gets to London, and it doesn't seem to do most of us any harm!)

The building has been a film star on many occasions (featuring in Sherlock Holmes, and an upcoming 2015 release that they're not supposed to talk about, but involves a cupboard, a monster and Daniel Radcliffe) and is apparently the setting for a scene in a video game (The Getaway: Black Monday). I did think as I wandered round it that it was an awfully perfect place for an action thriller. So many moving parts to duck through, things to climb, swing and jump from and... heaven forbid... to smash. It's the sort of place you'd get a final showdown à la Zorro or Pirates of the Carribean... lots of things to climb on, swing from, get caught in, smash, and use as found weaponry.

In a fitting connection between Arts and Engineering Sir Peter Bazalgette, the current Chair of Arts Council England, is a direct descendant of Joseph Bazalgette. He is also president of the Crossness Trust, so staying connected to his heritage. More notably he is the man responsible for Chanel 4's Big Brother, which leads to reflections on which direction the respective Bazalgettes pumped shit.

With luck and the energy of the volunteers Crossness has plans to grow as a visitor attraction over the next few years. They are working on ways to make it easier to get to, and plan to increase the number of steaming days.

Meantime, the dates for the rest of the year are 22nd June, 27th July, 31st August and 12th October. Visitors are very strongly recommended not to wear heels, as they will go right through the holes in the upstairs platform (much to the amusement of everyone else.)

If I can swing it there may be a Loo Tours adventure out there at some point as well. You can stay up to date on any developments on my e-mail list.
Posted by Rachel Erickson at 4:54 AM