Thank you for inviting me here today! As someone with no medical qualifications I'm here to lighten the mood and hopefully provide a bit of useful information on public toilets. We'll roughly cover:

Part I: How Loo Tours was created This is me on graduation day in 2012 from the Central School of Speech and Drama.

I thought my whole life I was going to go into theatre. I grew up doing ballet, and then moved into directing and later into stage management and costuming. I had fallen in love with England during a study-abroad programme during my undergrad, largely because of its arts scene, and decided that this was where I wanted to live forever and ever.

I moved to London in September 2011 to study for my Masters in Applied Theatre, which is essentially theatre with some sort of social mission… so it encompasses theatre in Education, Theatre in development, theatre in prisons… that sort of thing.

When I wasn’t studying I was always exploring the city, and I developed a slight obsession with where I could use a toilet for free.  I did not like having to pay 30p! You can get a very good sainsbury’s basics chocolate bar for that!

So I started to learn where the free publicly available toilets were. And I started noticing things like the fact that in Westminster station it cost 50p rather than 30.


This lead to a joke with my family that I should write a guidebook (It was going to be called the Wee Guide.)

It would have remained a harmless joke, had I not happened to mention it during an interview to be a tourguide. My interviewer immediately went “you should do a tour of that!”

But being a curious person I started researching to see what I could find, and found it’s a much richer and deeper world than I ever could have imagined. Here are just a few of the adventures I have been on in my year of being a Toilet Tourguide:


Part II. The Rise of the Public Toilet

One area I focus on particularly in my tours is how the public toilet got to be the way it is.

The British Public Toilet is a sort of institution. Generally public toilets in this country are traced back to the Great Exhibition of 1851 the Crystal Place in Hyde Park. 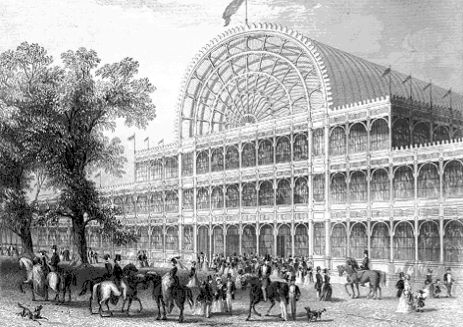 Though strictly speaking there were certainly public toilets around before this date, these were the first ones to receive a lot of press and recognition. The project was backed by the Society of the Arts, and they used it as evidence in their final report to parliament that the public of London wanted and needed toilets.

People were somewhat skeptical about the whole thing, but over the 6 months of the exhibition the toilets has 827,280 visitors and raised £2441, 15 Shillings and 9 pence.  When the Crystal Palace was later moved down to Sydenham, George Jennings, the sanitary engineer who had been responsible for the delivery of the project managed to get permission to move the water closets as well, where they continued to generate a profit of approximately £1000 a year.

This sparked a sort of revolution as people realized that there was potential profit to be made with the provision of public toilets, and, if there can ever be said to have been a golden age of public toilet provision, then the end of the 19th century probably was one! 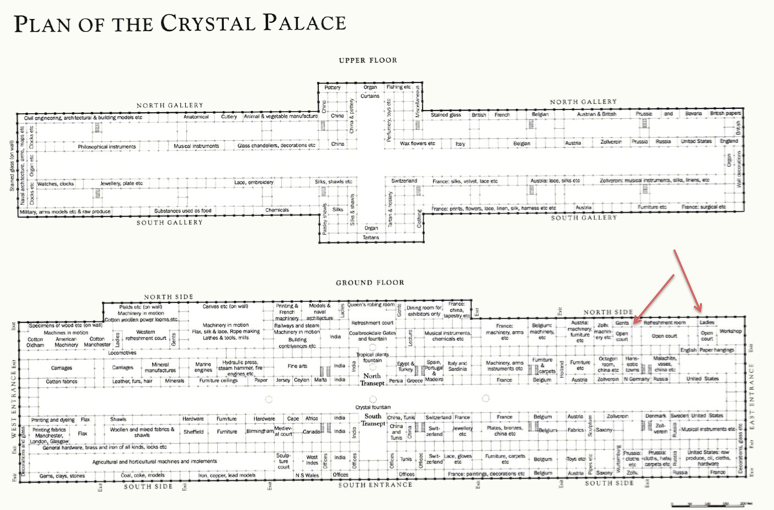 But all things were not created equal: designers of the time were almost exclusively white able-bodied males, and the toilets of the time very much reflect this. On-street Urinals were much more common than actual water closets, and  often-times even when there were underground toilets provided these were often-times for men only. Even the underground provision often favoured men, with Women's toilets being much fewer and far between. 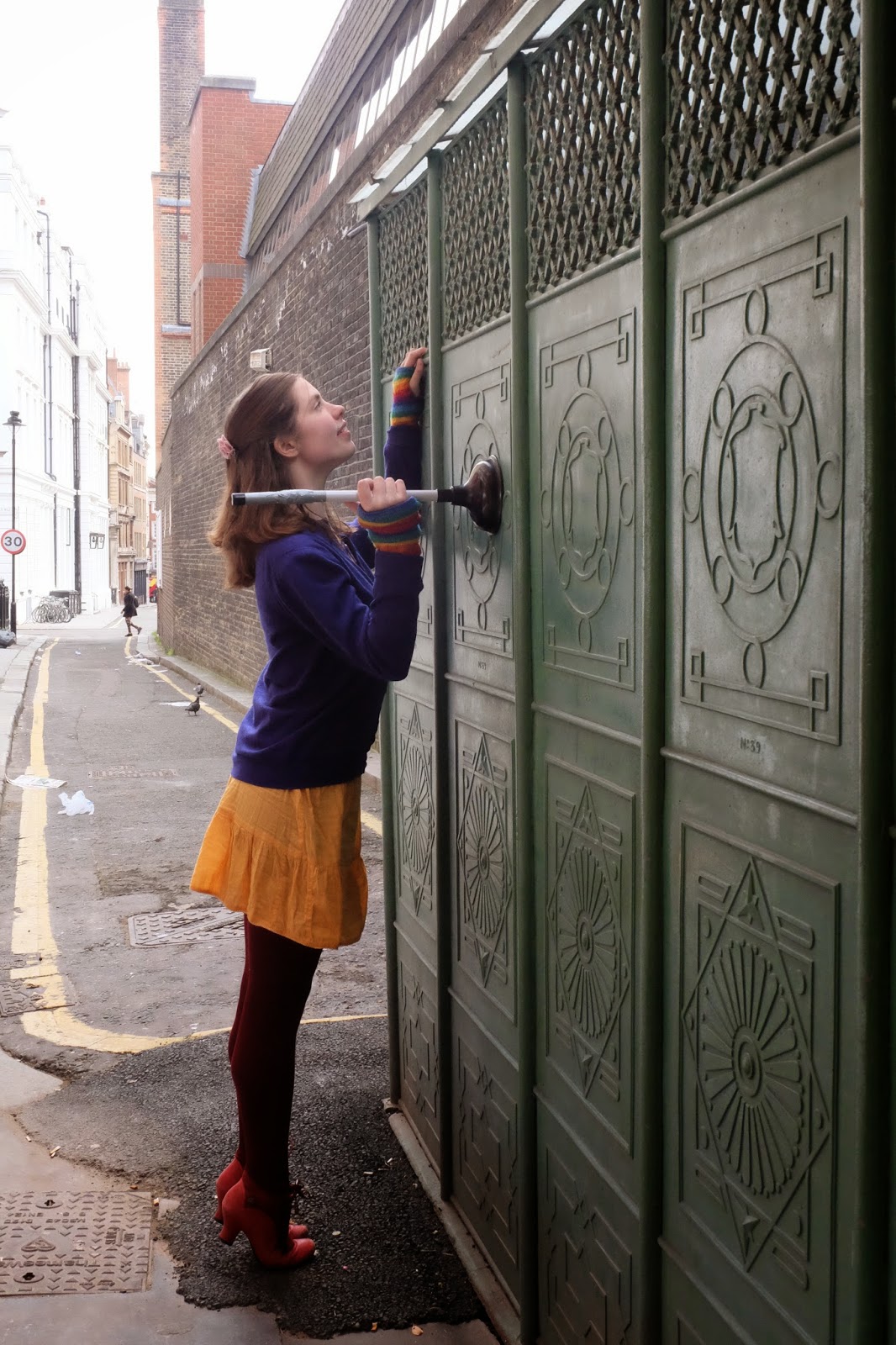 A great campaigner for more equitable toilets was the playwright George Bernard Shaw who, in 1910 wrote an essay called “The Unmentionable Case for Women’s Suffrage”

"The unmentionable question of sanitary accommodation occupied a good deal of the time of the Borough Council. I invite the male reader to give his mind to this with some care. The sumptuous public lavatories which now provide the poor man with the only palatial luxuries he ever uses meet two requirements, one of which, being frequent and simple, costs him nothing; whilst the other, involving the use of a separate private apartment, costs him a penny. If this charge of a penny were extended to the gratuitous accommodation, which is used perhaps a thousand times for every once of the other, there would be an explosion of public indignation which would bring to its knees at once any municipal authority which dared to impose it. Women had two grievances in the matter under my Borough Council. The first and worst was, that in most places no sanitary accommodation was provided for them at all. But this, at least, was known and understood. The second, which no man ever thought of until it was pointed out to him, was that even where accommodation was provided, it consisted wholly of the separate apartment at a charge of one penny: an absolutely prohibitive charge for a poor woman… The moment it became known that I was one of those ungentlemanly and unromantic men who reject the angelic theory of womanhood, I received piteous anonymous letters from women begging me to get the penny charge at least reduced to a halfpenny. These letters, and the reports and complaints as to the condition of all the little byways and nooks in the borough which afforded any sort of momentary privacy, revealed a world of unmentionable suffering and subterfuge"

On something of a side note, I have a theory at the moment that the reason we have lived for so long in a male dominated society for so long is men’s ability to pee standing up. Everything from out facilities to the fly front zips on trousers is designed to accommodate this!

This male-domination is a trend that continues a bit even today. 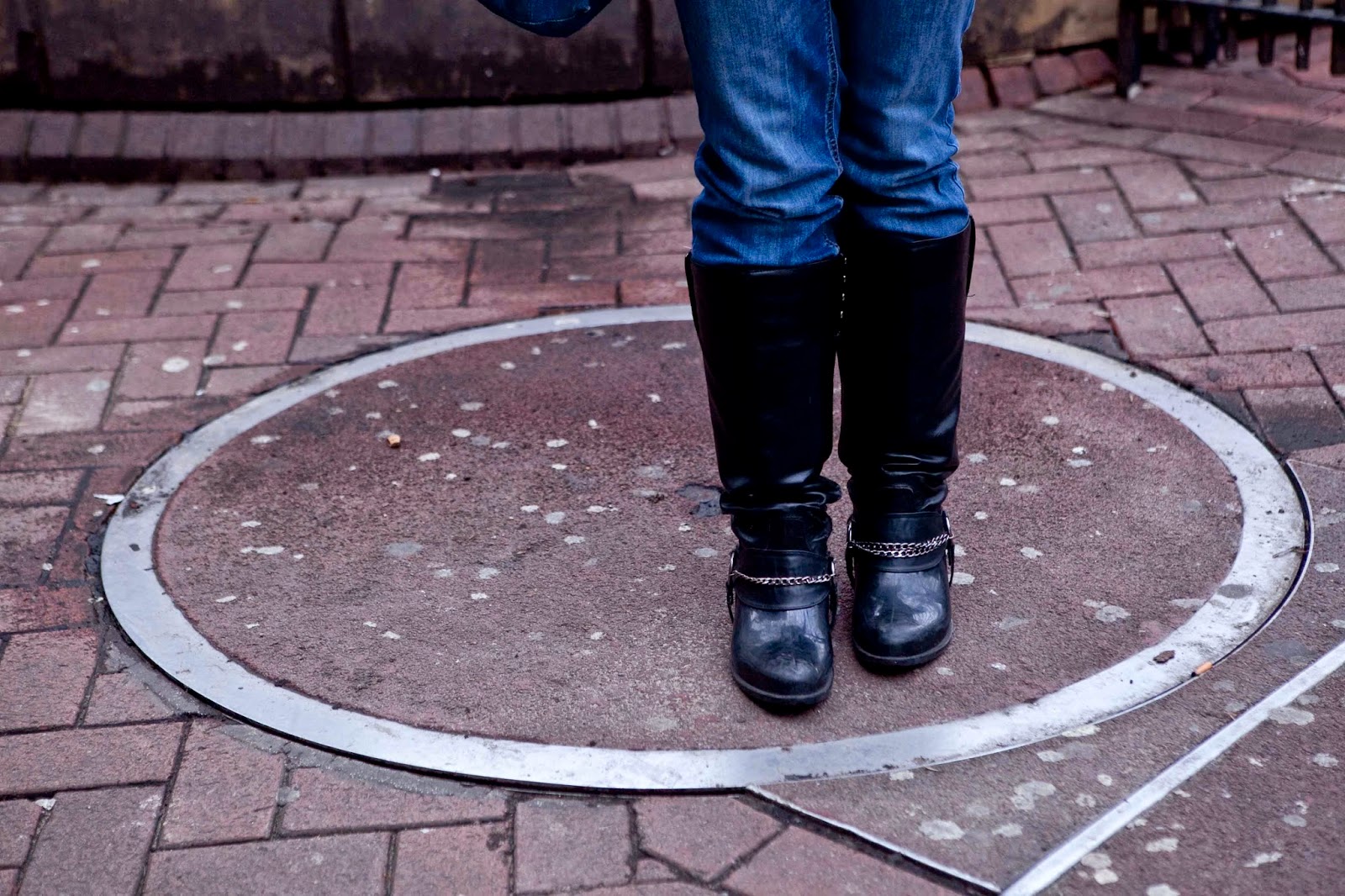 This is a uri-lift, which is an open-air urinal that remains underground in the daytime and then pops up at night. London has installed quite a few of these, and they are great for preventing drunken men from urinating on the streets. 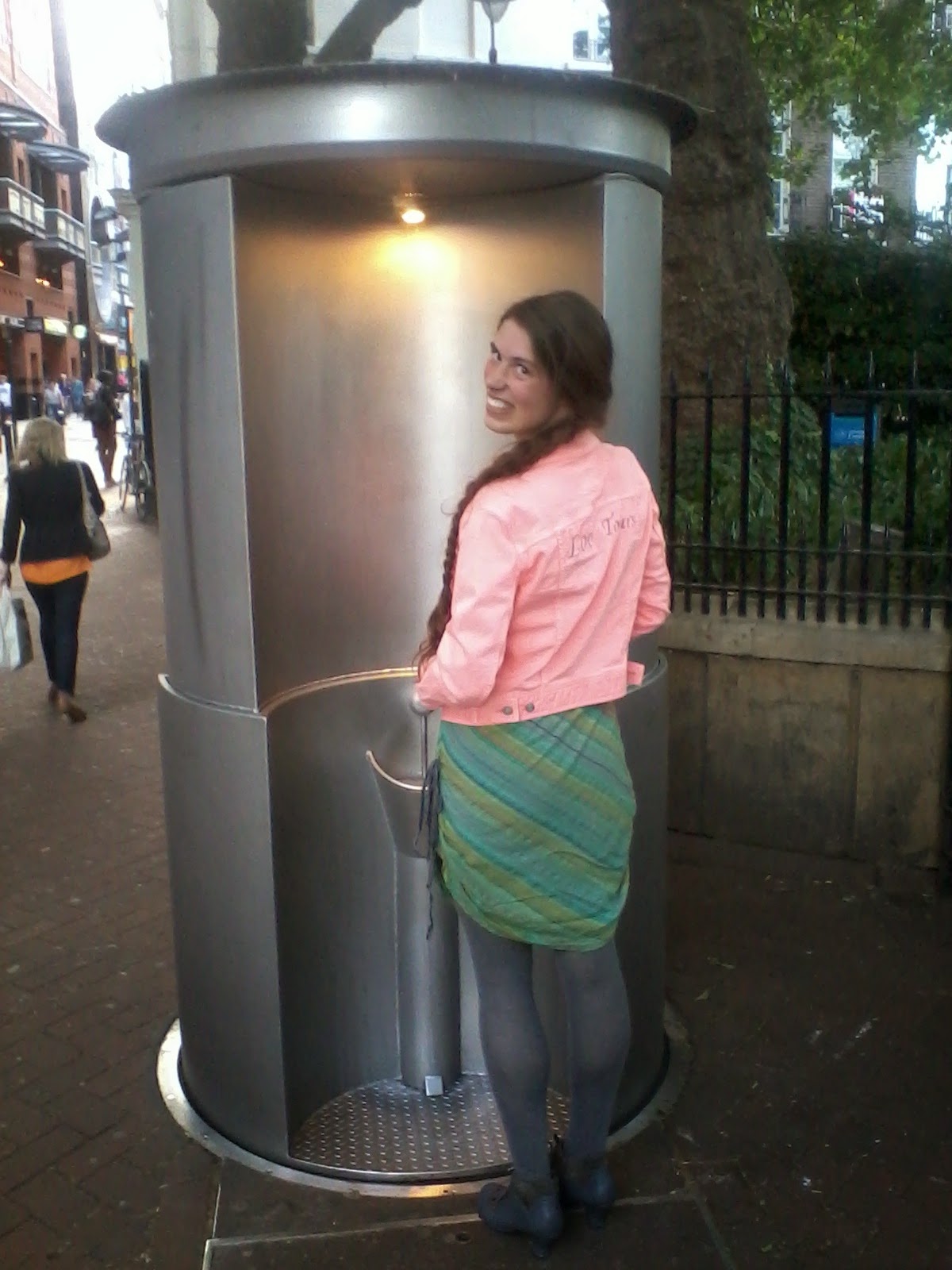 The company that makes them actually has a similar design that is accessible to women, with a closing door, and a sit-down toilet inside. As far as I know London has not installed a single one of these, so women who are out at night have nowhere to go.

The logic is obvious: Men are anatomically more able to pee anywhere so this is a preventative measure to stop them doing so. Ladies: If we want more toilets we have got to start peeing on the streets!

We have developed what some writers call a 'false consciousness' around toilet provision, and have learned to take for granted longer queus, and holding it when necessary. In my opinion, we need a bit more of Shaw's "explosion of public indignation" to change the situation!

Part III: Toilets and Taboo: Bringing them out of the closet!

This brings us to the heart of the trouble with toilet provision today, and that’s the difficulty people often seem to have in talking about them.

Along with a precedent for toilet provision, the Victorian era has very much evolved our perceptions around taboos and bodily functions and where they take place. We are supposed to be disembodied creatures, and so to admit to our actual physical bodily functions can be embarrassing (and more so if they differ to or are more urgent from other people's needs.) Culture has made them secret and shameful. It is the era where genders were decidedly separated, and toilets became less talkable. To quote Shaw’s essay once again:

“English decency is a rather dirty thing. It is responsible for more indecency than anything else in the world. It is a string of taboos. You must not mention this : you must not appear conscious of that: you must not meddle with the other - at least, not in public. And the consequence is that everything that must not be mentioned in public is mentioned in private as a naughty joke.” (G.B. Shaw, 1910)

That is still the culture we are still in today, although I think toilets are slowly becoming less taboo… One of the things I actually love about my job is that as soon as people learn what I do they usually have a toilet story, and I think, in fact most people are closet toilet-enthusiasts if you get the right hook. 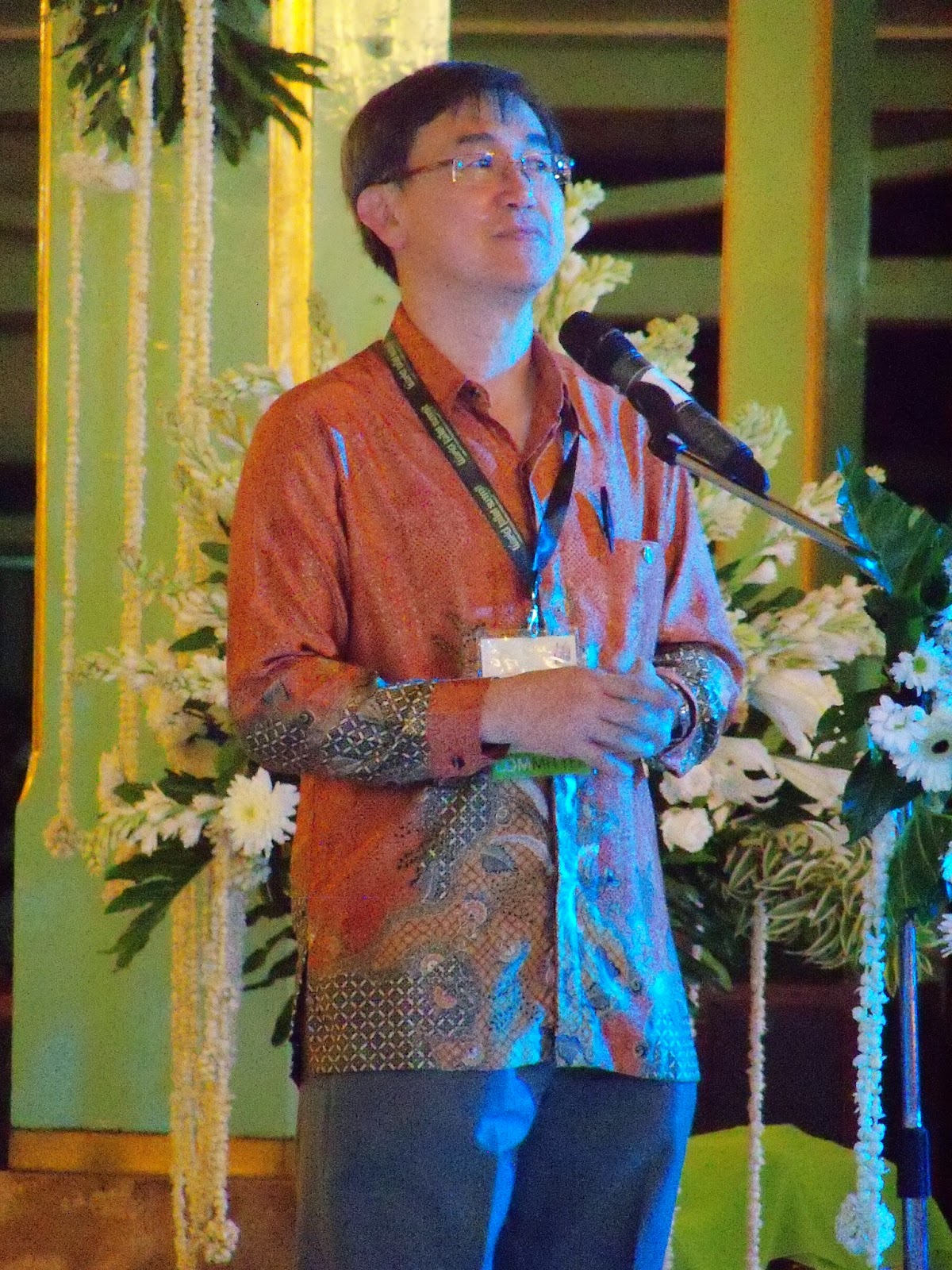 That is where my work sits at the moment, and I’m always trying to figure out how to use the entertainment side of what I do to get some action to take place. I think one of the biggest challenges around improving toilet provision is that quite a lot of people are apathetic about it, either because it doesn’t affect them very much, or else because we are socially conditioned to deal with the inconvenience.


So What Can we Do About It?

These are just a few general points, and there are doubtless many more things that can be done, but they are my recommended simple starting steps:


I am continually on the lookout for ways to expand Loo Tours and to make what I do useful as well as entertaining, so if you think I can be of help in any way, or have a story that you think needs to be shared don't hesitate to get in touch!


Some Links mentioned during the Q&A:

I have a select list of toilet maps and apps on my website at: http://lootours.com/london/maps.html
For those interested in the Radar key scheme, information can be found at:
https://crm.disabilityrightsuk.org/radar-nks-key

Posted by Rachel Erickson at 5:56 AM