I am a Toilet Permission Object: the who and why of the Loo Lady

Defining who I am and what I do has been very much on my mind lately as I face potentially major changes both in location and career. I always feel like “reflections on my own practice” is a terribly pretentious phrase used by out of touch academics but I suppose that’s what this is.

These particular reflections are based on a great conversation with a new friend.

I have been called many things in my time, but that was a new one. The revelation came over coffee and chat in a new friend’s office. The connotations could get interesting there, but I actually like the label so much I wrote it on my arm so as not to forget it before writing this blog post (Now hoping I'll be able to get it off before my Morris Dance gig tonight!) 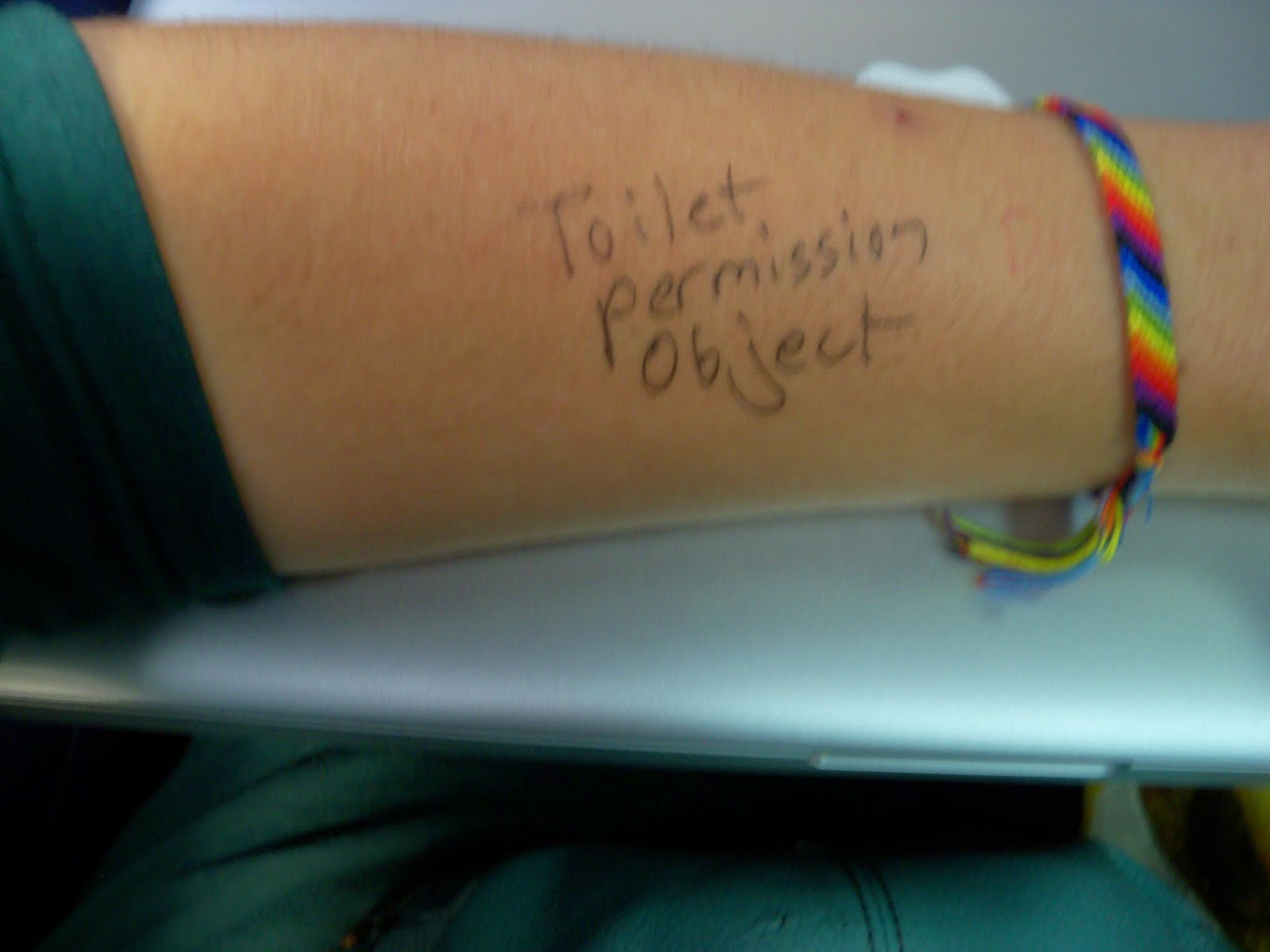 I spent the last couple days at the Watershed in Bristol participating in the Making The City Playable conference … a chance for artists, city planners officers, and various others to get together and talk about how play can be facilitated or allowed to happen in cities (and what exactly that means!)

I went to the conference very much with my Loo Lady hat on. Having spent so long in toilets and seen them from many angles I have become increasingly interested in how I can put the peculiar set of knowledge and toolkit I am developing to good use. There are many serious angles to toilets, and I want to see how the soft approach of humour, storytelling and fun might help advance these agendas rather than allow people to write them off (which is admittedly a risk to that approach if the balance isn’t right.)

In many ways I am fortunate to have entered the toilet field as a clean slate. I just  put out an open search for toilets, and therefore sit at the centre of a fascinating web… local toilet politics, city planning, global development, water, architecture, disease… if it somehow comes back to the human process of relieving oneself and how we deal with that then I leave no depths un plumbed.

I have found that putting out this open invitation of “toilets!” leads to a number of different conversations. It is something that every human being identifies with on some level, and everyone has a story whether they know it or not. Usually as soon as they know that I’m open to hearing these stories they want to tell them. This extends to complete strangers who have stumbled across my website or seen an interview and take the initiative to write to me.  They range from best/worst toilets  to people’s toilet sins… places they urinated where they shouldn’t or times they left a toilet somewhere blocked up. I often wonder if they feel somehow absolved by having shared those stories.

I was reflecting on this when my new title was coined.

The beauty of it is that there is an equal exchange of permission going on. I may be the perceived permission object, but I become that because that is what they have given me permission to be.

It is a character or a persona that has evolved organically. When I first started doing toilet tours the interest was very casual. Friends started sending me things about toilets… not because I ever asked them to, but because they wanted to share. Every morning I would wake up to find my facebook wall flooded with new articles and stories, “have you seen…?”s and “Did you know…?”s. Even the name The Loo Lady was given to me by someone else. All I have done is to say “yes” as these things happen.

It is very important to me that I do not shove toilets in people’s faces (either literally or metaphorically.) I try not to evangelize, and have made it a rule to let other people take the initial lead on any toilet conversation. I only tell them what I do if they ask, and I only elaborate when they show interest (which is usually.) If they show interest in a topic will accept their offers and expand on them, but it’s always down to someone else to engage.

The Loo Lady is, in many ways, inextricably linked with me. I share her unbridled enthusiasm for toilets, but she’s not the only person I can be (I sometimes have to remind people of this… more than one person has started an invitation “it’s not about toilets, but…”) I am curious whether she, or what she stands for at least, might exist independently of me. What is it that allows “toilet permission” to be granted? Do I spawn a new toilet permission object each time a tour guest goes away to share toilet stories with their friends?

More food for thought on the PhD front (academicism is a slippery slope… I really ought to look into registering myself for a 12-step recovery programme!)

Posted by Rachel Erickson at 8:36 AM