Wibbly-wobbly-timey-wimey... the wonderful randomness of life.

This post has very little to do with anything I normally write about on this blog (toilets or entrepreneurship.) But it's my blog, and I can do what I want, so hey! I get to do a self-indulgent ramble about myself once in awhile.

This is a story of random encounters, unexpected thought provoking meetings, and the things I will miss the most about London.

This story really starts a couple weeks ago…

I should really start by introducing you to my parrot, Newton. He was a Christmas gift in 2012… the 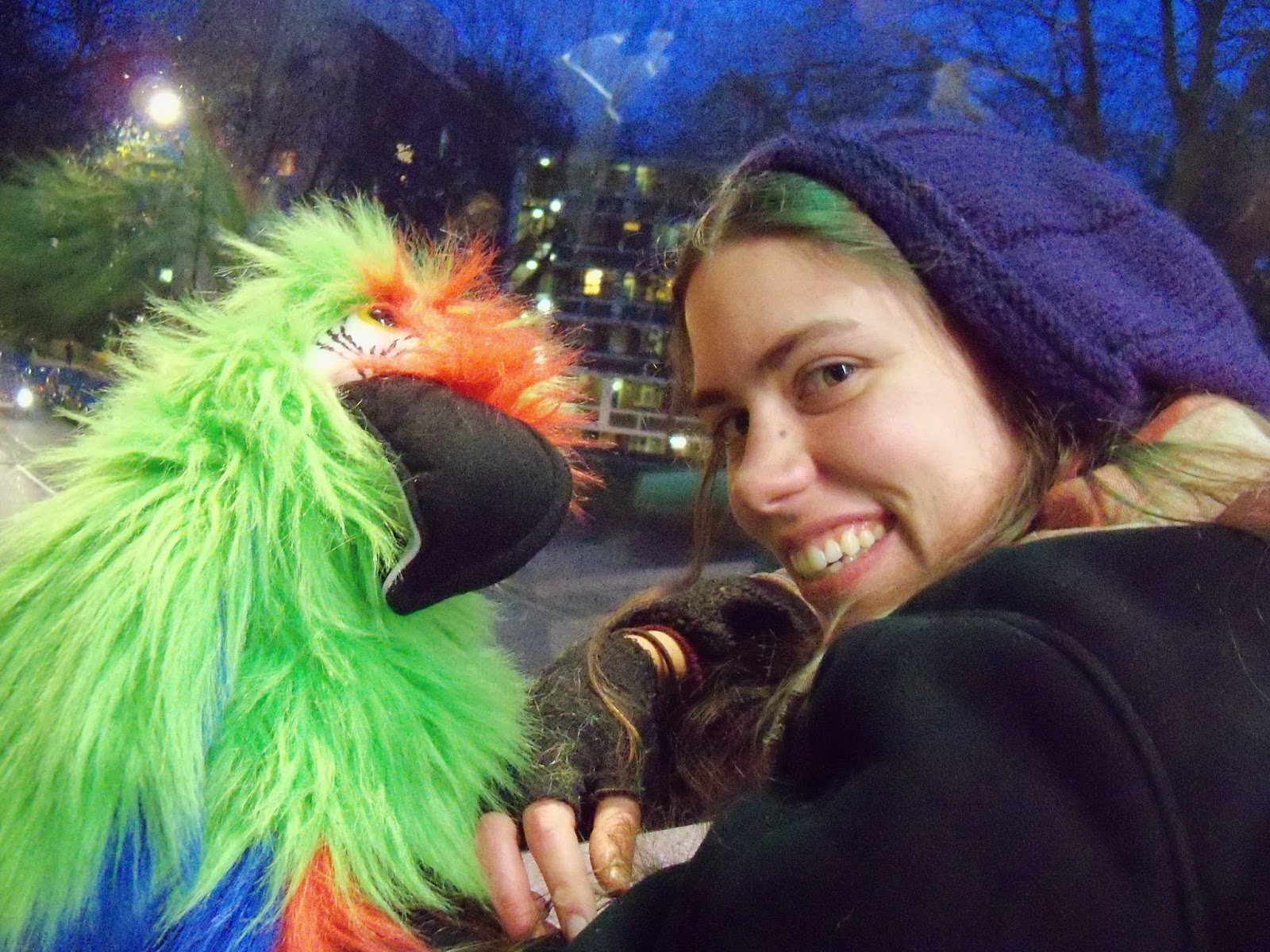 year I got stuck in the UK over Christmas because UKBA couldn’t be bothered to return my passport in time for me to get home and see my family. After a month of sitting in my room looking sad I started taking him out for adventures. After a couple weeks of bringing him to the office if I forgot people would ask after him. “You can’t come in without Newt!” Story of my life…. My parrot becoming more popular than me. I liked him partly because he made people smile, but also because he acted as what my academic friends would call a permission object. London is notorious for people living in bubbles. But it only takes a small variation from the norm to pop them. Newt provides that introduction. He was also great for business networking events, which have never been my forte. I'm not very good at just striking up a conversation, but having a parrot got people's attention. And I figured it was a good filter: anyone who didn't want to talk to Newt probably wasn't going to be very interesting to me.

As time went on and I started doing Loo Tours Newt came out less. I reasoned it’s  all well and good to be the parrot lady or to be the toilet lady. But trying to be them both at once is perhaps a bit much. There is a threshold of crazy eccentric which even I haven't quite crossed yet.

Back to two weeks ago.

I was on my way home from the theatre. High on life good conversation and possibly half a glass of red wine (normally I stop at half a shandy, so that's quite indulgent for me.) I was taking a slightly unusual route home and had just got off the Piccadilly line (where I had been having a nice chat about public toilets with a green grocer) and was waiting for the Victoria line train back to Brixton. A smartly dressed man on the platform a little way down looked familiar. Danny Pink from Doctor Who? I thought so, but I wasn’t about to ask. He yawned. It was contagious. I yawned. He smiled. Once again Newt proved an icebreaker, and we started chatting.

By the time we got on the train I had told him about Newton and Loo Tours… he was skeptical, but he did come up with a pun I’ve not heard before (an increasingly difficult task) so we can forgive him that. “If I came I’d say ‘out of ten you're an eight’” (You have to read it out loud…) Finally, once I’d thoroughly exhausted talking about my quirks I got to ask “so what do you do.” “I’m an actor.” Ahha! “You’re in Doctor Who.” “I was.” “They killed you.” “I killed myself.” We talked a little bit about the show (Perhaps because of the alcohol I proceeded to try and explain without very much eloquence why I'm not a fan of Steven Moffat as a head writer (that is another long blog post.) He listened politely.) I asked what he was up to now that he had turned into a cyberman and blown himself up he told me he was currently in a play called State Red at the Hampstead Theatre.

Me and Newton decided spur of the moment to go to the matinee of State Red. I am trying to take as much advantage as possible of London Theatre in my last few weeks here, so will follow any lead. We got there quite early so I grabbed a tea and found the only empty table in the crowded downstairs lobby. I had been there for a few minutes when another woman asked if she could join. We got talking. We connected pretty quickly and the half hour to the start of the play flew by. She shared her cake with me. Since seating in the theatre was un-reserved we sat together.

The play was timely. Institutionalized racism within the police force… all the things my facebook feed has been exploding from in the wake of Furgison.

Samuel Anderson (that's Danny Pink) plays Luke, a mixed race police officer who returns home the night before his father is named Police Commissioner. Through the play Luke's past comes out. He shot a young black man and has spent the past year coming to terms with his relationship to the police to their practices, to his family, to the family of the boy that died...

After the play my new friend and I chatted a bit more in the theatre until an usher threw us out. She talked a little bit about her experience as a mixed race disabled woman. Something she said has really stuck with me; “There needs to be compassion for people who can’t see their own blindness.”

I think I understood what she was driving at. Institutionalized racism, sexism, abelism... most any -ism is often perpetuated most dangerously by well meaning people. At one point in the play Luke grills his friend Matthew (I paraphrase profusely)... "when you think of a gangster what image comes to your mind?" Matthew sidesteps... "tracksuit... trainers... knife..." eventually he reluctantly concludes "and we're in London, so probably a young black male." Similar situations come up at other points where Luke forces members of his family to confront their own prejudices. They all have difficulty... no one wants to admit they're racist (it isn't Avenue Q.)

She had to run off to catch a train, so I said goodbye promised to stay in touch and waited in the lobby on the off chance I'd be remembered and get to say hello. While I was waiting I noticed a gaggle of people with doctor who tat... surrounding a man who turned out to be none other than Peter Capaldi (the current Doctor Who.) I was remembered (or at least Newton was.) I did something I only do on very special occasions and asked for a picture. Once for the memory banks. An homage to random chances.

People have been asking me what I'll miss the most about London when I move home. I think it is the possibilities this city has to offer. It feels like anything could happen here. You could meet anyone and be anything. It is a city that says yes to things. All the best things I have done have been accidents. Being in the right place or doing the right thing at the right time. The people you meet, whether a passing brush with celebrity or deep conversation with a stranger.

I suppose that can be said of anything in life... if I had taken my normal train home, if I hadn't bought a tea, if I hadn't gone to the matinee...  if I'd've gone home for christmas two years ago... I never would have met... never would have talked to... a seemingly random chain of events leads to a conclusion (that is really just another random event in the grand scheme of things.)
Posted by Rachel Erickson at 7:12 PM