My two cents on a successful Crowdfunding Campaign 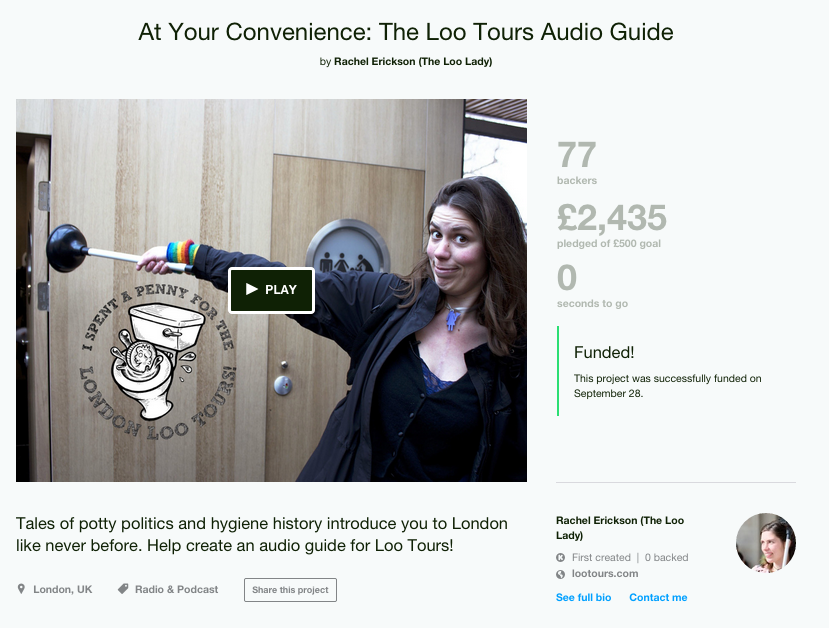 I work in the arts... which means I'm around lots of people looking for money a lot of the time.
After years of supporting or being involved in Kickstarter campaigns and seeing countless more posted on FB and in e-mails (some of which did well, and some of which flopped miserably) I finally launched one of my own. I learned a lot in the process, and it ended up being quite successful and raising nearly 500% of the initial goal (you can still check it out here)

Since then I have been approached a few times about advice for other campaigns. So here are some of the things I think are most important.

Rule 1: You already know your backers!!!

This is the most important thing which a lot of people fail to realize.

Crowdfunding platforms are not magical money making machines to which eager investors flock to poor money into your idea. Most of it will come from people who already know your work... friends and family, previous audience members, your mailing lists and facebook fans.

My project got 77 backers and with two exceptions I had already had some form of contact with all of them before the kickstarter had launched. The first on board were family and friends who have followed my work (willingly or by force) for a long time, and I know will always be behind me (and would probably back the campaign even if it was a bit shit.) Others were former tour guests who had enjoyed the tour and who I had kept in touch with either over social media or through my mailing list. A select few people I'd never met but corresponded with quite a lot on either e-mail or twitter where we had bonded over shared interests.

So before you start your campaign it's important to think who your backers will be, how much they're likely to donate, and whether that will be enough to reach your goal. If you don't already have a network of fans outside that 'will donate anyway' circle of friends and family then Crowdfunding may not be the best way forward (you'll spend a lot of time creating it, and pay around 10% comission fees, when a direct ask might give a better return for less work.)

The upside to this is that since you know who your backers are, you can plan to make the most of your opportunity to talk to them. You've got a target market.

Some people think the campaign begins the day you hit the launch button. But if you wait until then to tell people about it you've missed your prime opportunity to raise money.

You need to start well in advance, talking up the project, letting people know what you're doing. You don't have to smack them over the head with the fact that you're raising money, but get them excited about it, so when it comes they want to be on board from the beginning.

An interesting lesson learned: I had several friends with experience look at my kickstarter before I launched to get feedback. I asked them to point out the strengths and weaknesses and anything that would lose or confuse them as a potential investor. Was it clear? Was it interesting? Did it look realistic? Quite a lot changed thanks to their feedback. Revise and revise again. A cool and unplanned consequence was all of them pledged very early on. The point here is not to trick your friends into pledging, but to point out that when people feel they have investment in something they are more likely to support it financially.

Sometimes it even helps to rally people who you know are going to donate to be there for the first few hours. Campaigns that have a strong kick-off will gather momentum, because others want to be part of something successful. A campaign that reaches 50% of it's goal in the first day is going to be a lot more exciting than one that's still hovering at 40% 15 days in.

in order to build momentum...

It's counterintuitive but in crowdfunding modesty is rewarded.

You should really have three budgets in mind:


The smallest number becomes your target- that's the point at which your campain has achieved its goal and you will get money (don't forget to account for kickstarter fees!) The middle number (the amount of money you're actually hoping for) is your first stretch goal, and the last is an additional stretch goal. You can add more stretch goals in between. Be specific where you can with what cool thing will be added at each step.

There are 2 very good reasons for aiming low:
Here's a snapshot of my campaign (£500 at which level I would have put in a significant amount of personal funds. £1,200 was the actual goal.)

Don't depend on your crowdfunding page to do all the work for you. You need to not only share links, but embed widgets in everything you've got (your website, facebook, blog...)

As you can see from this graph only 10% of my backers actually found the project by going straight to the kickstarter. The rest "pledged via external referrers" which means all the places I stuck those links and widgets where I knew they'd be looking anyway. 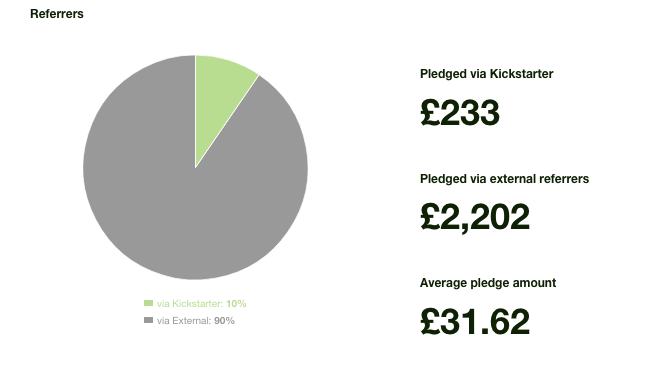 You also have to be prepared to harass people gently for the duration. Ideally you want to still have your friends at the end of it, so do it nicely and keep it creative and entertaining. But don't feel bad about it... if it's a good project they'll want to know about it!


You've got to be brutally honest about your own star power.


No matter how amazing you are crowdfunding is a business transaction. Ideally all your rewards will be a direct result of whatever you're doing anyway (e.g. I was making an audio tour, so my main thing was downloads... essentially advance sales.) but don't be afraid to get creative within that (e.g. the artist doing my cover art designed bespoke prints, available digitally, as prints or framed prints for different levels.)

Your best hope of attracting that elusive pool of people you don't know is to have things that are so cool and compelling that they would want to buy anyway.

Signed items are nice, but be realistic about the value of them... it's great if you're a celebrity who gets asked to sign things a lot, but if not then the main people to whom that signature will have meaning are your family (who as stated will probably pledge no matter what... and hopefully already have lots of birthday cards and letters signed by you anyway and don't have to buy your signature!) If you're charging £50 for your signature you have to be able to justify it.

Likewise shout-outs on social media. It's a noisy space.

On the back of this:

Include lots of levels!

Don't jump straight form £10 to £50 donations. My average donation was around £39.5 and most people donated £15-30. Leave options for all price ranges (and think about what kind of thing might encourage people to up a pledge from £15 to £20)

A Note on Budgeting:

When you're initially budgeting your campaign you've got to remember two important things: Kickstarter (or other platform) fees and the cost of reward delivery (production and postage.) You can see from the breakdown here that this ended up being about 1/3 of my final expenses. A lot of my rewards were delivered electronically which helped massively (it meant I was posting things to about 25 people instead of 77.) 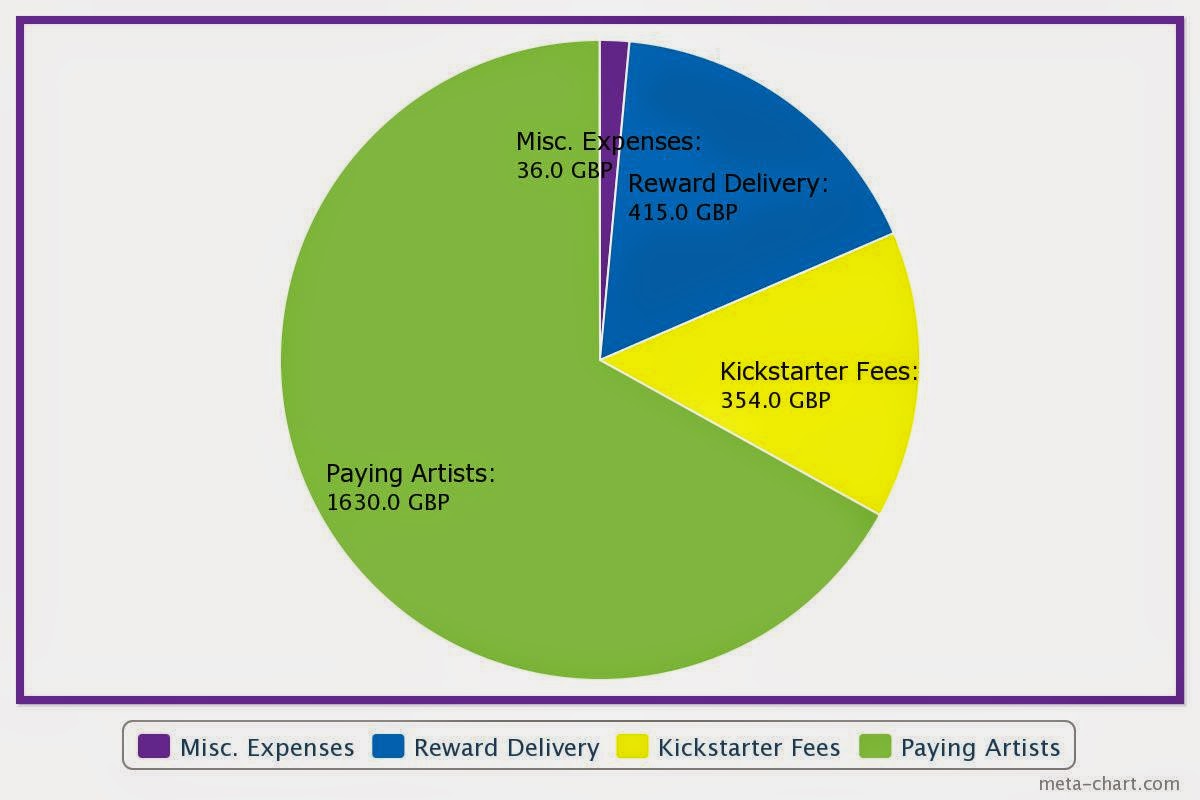 Once you have the money...

You thought that last bit was work... but it's just beginning. Now you have to make that amazing vision a reality. Don't forget to keep the backers updated!

Credit where credit is due: lot of the things I got right I learned from two other great friends, who say a lot of the things I've said here (with arguably a lot more eloquence) plus more, so do have a read One Weird Trick for a Successful Kickstarter Project  by the Double Clicks (especially if you're in the music biz) and Please Stop Crowdfunding by the awesome Sean Brian (the fact that in spite of everything he backed my project was truly one of the proudest moments!)
Posted by Rachel Erickson at 10:45 PM