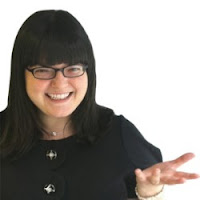 What is that blue stuff… and why isn’t it red? Will all the menstruators performing at the Fringe really synchronise cycles? Really? And how can century-old ads still affect attitudes now? For everything you never knew you needed to know about periods, there’s comedian and sex educator Chella Quint. As heard on Radio 4 Woman’s Hour, she deconstructs taboos with wit, adbusting and brute force. Period comedy for menstruators and non-menstruators of all genders. 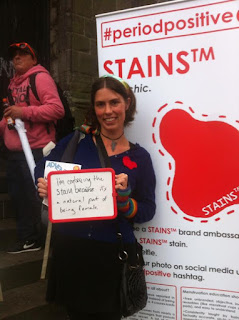 I met Chella Quint on the high street handing out felt stains and getting people to take selfies as part of a 'flashblob' for her Period Positive project. Even though my Edinburgh evening was already scheduled tightly and her show was way across town I knew I couldn't miss it. It seemed like it was meant to be- It had been my day of the month to be miserable and achy, and the only thing keeping me from crawling up in a ball and wallowing in self pity was pure festival adrenaline (pity that can't be bottled... it's much more effective than ibuprofen!)

I have written a bit about menstruation before as it's closely related to toileting, not just because of the anatomical proximity of where the respective fluids come out, but because a) we often deal with it in the toilet, and b) many of the same issues of same and secrecy apply to keep people from talking about it in a productive way. In fact, as taboos go menstruation seems to be far more taboo than most any other bodily function you could think of.

The Edinburgh performance was quite autobiographical, as Chella introduced us to her research and her current practice. It was also participatory: we played a version of twister, we did an interpretive dance about types of menstrual hygiene products (Internal/external, disposable/reusable!) we tried on 1950's pads with belts. We got badges for participation. And we laughed a lot as the puns flowed freely.

Chella has a gleeful "love to hate" response to some of the absolutely preposterous statements that advertising campaigns used to make (... oh wait... and still are making!) about how women should shroud their periods in secrecy and let anyone see or smell evidence. Even the trappings are meant to be disguised.

Compare this modess advertisement from 1949: 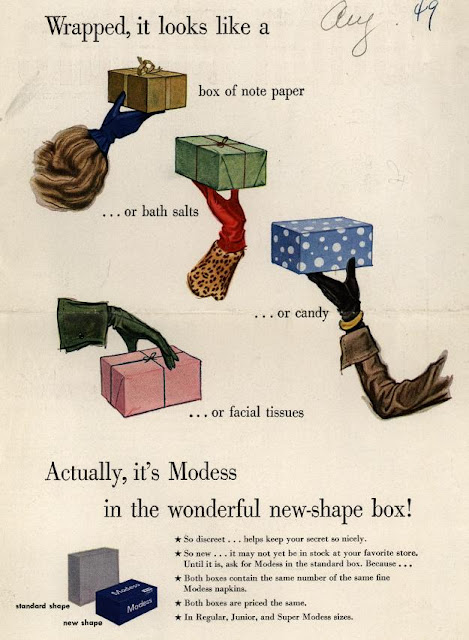 Discretion of course has its time and place. Nobody is proposing that we waltz through the streets chanting pagan hymns and waving bloody tampons in people's faces. The problem is not with the fact that people may wish to be discreet, but those who shame them into thinking they must... and too often this shame is played upon and intensified by marketeers. And this leads us to the Period Positive message (the following is stolen directly from the Periodpositive.com website)

"What does period positive mean?

"Chella developed #PeriodPositive to counteract the mainly negative public discourse. She accepts that people both love and hate periods, but tries to unpick how big an influence the media plays in these attitudes. She aims for ‘period neutral’, using a positive approach.

"If you are period positive, this means you are willing to confidently ask and/or frankly answer questions about periods, understand the importance for menstruators to chart their cycle and treat it as a vital sign, avoid passing on shame to others, and if you joke about it, that you make sure menstruators aren’t the butt of the joke."

She also has a wonderful list of creative fun ways to work against taboos using the tools of the enemy (consumerism!) My favorite is StainsTM, a line of trendy products which menstruators and non-menstruators can wear to reclaim the stains that we are taught to be so embarrassed by, turning them into objects of desire. I feel like there's milage for a project runway challenge in this (if Heidi Klum and Tim Gunn don't jump on it, then perhaps it could start local?) Surely period fashion would be the perfect accompaniment to period drama?

Here's a start of a mood board (though we can get much more creative than this!)
Anyway, that's my fantasy for the moment (it's 2:30am in Edinburgh, so this may or may not seem like such a good idea in the morning.)

Finally, I have to share a song about pads by the incomparable Evalyn Parry:

Doubly relevant (if only to me) because I had to slip out of Chella's show slightly before the end to dash across town to the Hub to see a concert of music composed by Evalyn's brother Richard Reed Parry. His music of course was rather different (and nothing to do with pads, tampons, periods or toilets.) But I like random coincidences all the same.

For those who read this blog to see what I'm up to as well as for the toilet/bodily function related stuff, here's the preview of Wave Movements. It was a beautiful change of pace from the rest of the day.

Posted by Rachel Erickson at 7:04 PM