Edinburgh reflection: Felicity Ward: What if there is no toilet? 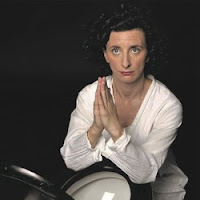 Felicity Ward returns with a new stand-up show about mental illness, irritable bowel syndrome and her search for the nearest toilet. Anxiety can be cruel, but very, very funny.

As we entered the theatre there was a toilet centre stage flanked by two symmetrical pyramids of toilet paper. Taylor Swift music was playing and several people around me were singing along.

Felicity is a powerhouse of energy and humour. She talks with just the right amount of graphicness about what it's like to have Iritable Bowel Syndrome ("I call it a closing down sale... everything must go!") and associated anxiety, interspersed with musings on her family, dominos pizza, late night radio, hairless cats, and religion. She had us all on our feet singing and dancing to "Father Abraham had many sons. I am one of them, and so are you."

Felicity said very near the beginning of the show that if anyone needed to go out and use the toilet during it that was cool. A couple people did and were suitably praised for their efforts.


Laughing about something vs. laughing it off

One of the questions I am interested in researching in my theoretically-might-happen-some-day PhD in toiletolegy is where humour is useful and where it becomes destructive. As George Bernard Shaw wrote:

“English decency is a rather dirty thing. It is responsible for more indecency than anything else in the world. It is a string of taboos. You must not mention this: you must not appear conscious of that… And the consequence is that everything that must not be mentioned in public is mentioned in private as a naughty joke.” (The Unmentionable Case for Women's Sufferage, 1910)

The implication here is that these "naughty jokes" are a bad thing because they allow the issues at hand to be brushed off without having been solved. It's an avoidance tactic. But Shaw himself uses humour and parody very successfully to engage his readers and audiences in all manner of social and moral dilemmas.

More than anything else, this "research" gives me an excuse to watch a lot of comedy!

I saw a handful of comedians performing at the Fringe. Some because I knew people, and some of it because I was handed flyers and it looks interesting. One because there was an exploding ice cream cone on the flier (which was false advertising because there was no ice cream, exploding or otherwise in the show... I'd have demanded my money back if it hadn't been free!)

It's well-accepted that stand-up comedy isn't for the easily offended. But that doesn't mean we shouldn't judge what is tasteful or not. Which of course is subjective, and there's probably an audience for everything. It should be noted, I hasten to add, that I consider conversations about bowel movements at dinner time to be the height of intellectual entertainment, so we're not talking about taste in terms of what Miss Manners might approve here.

For me the biggest thing that makes something funny instead of tacky is the comedian's ability to talk about things they are intimately familiar with. I don't think this means you can't make jokes about things outside your realm of experience, but there's a level of respect that makes it funnier. It's easy to get a quick gross-out laugh out of a joke about someone wetting or shitting themselves in a way that makes fun of the perpetrator with no sympathy to spare.

Laughter is a powerful tool that can both bond and segregate. To be laughed at can be highly pleasurable or incredibly painful.

Felicity didn't shy away from the grit. She talked about how you don't ever really get rid of mental illness... you just learn to manage it (one of the most profound "I never thought of it like that, but it makes total sense" take-aways for me.) There are still good days and bad days. And IBS is not a pretty thing to live with. But there was still a level of gleeful acceptance in the way she recounts the awkward stories of her life, the nagging voice in her hear ( who she calls "Beryl")

I wonder if laughter might be one of the keys to coming out of the closet for IBS sufferers. I have had at least three couples on my Loo Tour (one the day before their wedding!) who came because embracing the humour of the central role that toilets played in their lives had been a key to living fully again.


Check out Felicity's other work here:
felicityward.com
Posted by Rachel Erickson at 9:40 AM