I have been trying for about a year to get tickets for the Brighton sewer tour, but they were all sold out before I left the country last year. So this year when I finally bagged a ticket I was extremely excited... until two days later I received notice that all tours for the rest of the year had been canceled due to storm damage.

What was I to do? I looked about for the next closest sewer tour. Paris. Of course. Why not?

So here I am. I took the Euro star over this afternoon with a friend, and we made our way to the hostel. Mostly saving big adventures for tomorrow (tonight involved a lot of walking, eating a pretty decent burger and navigating the Metro.)

I have not come un-prepared. My french may be rusty to the point of uselessness, but I have in my possession the 1967 edition of le Guide Porcelain: the Loos of Paris by the inimitable Jonathan Routh. 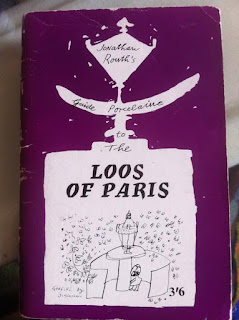 Like the London guide, I suspect much of it is now a ghost tour, but I have made note of a few of his particular recommendations that I will try to hunt down. Additionally, he includes some useful vocabulary for the English visitor:

Please direct me to the nearest loo in simple terms and without waving your hands in to dangerous a manner.

"Madame, I wish a toilet with paper; and a hand basin with hot water, soap and a towel. (My companion requires a urinoir only)."


So far I've not seen anything remarkable, but Paris seems pretty functional. There are a lot of plastic urinals and portacabins, especially along the river. There are also a fair few Sanisettes (self cleaning toilets) most of which appear to be free (so much for practicing those french phrases on the Madame Pipi's of Paris!) They are managed by JC Deceaux, and there is an interactive map and some history here: http://www.paris.fr/services-et-infos-pratiques/environnement-et-espaces-verts/proprete/les-sanisettes-2396 According to the website there are approximately 400, with 108 of those open until 1am and 20 open for 24 hours.
Posted by Rachel Erickson at 4:38 PM