I don't often manage to offend people, so it was interesting to re-post something I thought was reasonably innocent on Facebook and receive some fairly strong reactions to it.

Like many Americans I have been following recent Bathroom legislation in various states (North Carolina of course being the noisiest at the moment) and like most of my circle of friends I have been suitably embarrassed by my country. Toilets and gender have interested me for a long time, originally from a perspective of potty parity (which is very much a part of my life as a woman), and more recently from the trans perspective (which is something I cannot claim personal experience with, but I know affects a number of my friends.) This image caught my partly because it conflates the two issues: 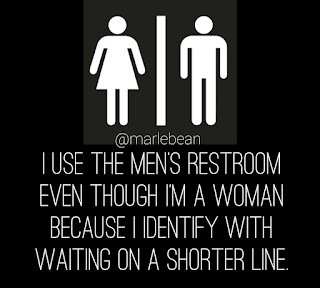 Perhaps these things are inappropriately combined in some people's eyes. I would have to agree that my annoyance at having to wait in ladies' queues pales in comparison to the risk that a trans person takes using a public rest room. It's not unlike the way my frustration at having to pay for (or worse, not being able to find) public toilets seems negligible compared to the plight of the billions worldwide who have no access at all. But that doesn't mean we don't or shouldn't talk about all the issues... and much of my toilet-ing work has been built on the idea that a) sometimes looking at multiple things at once leads to stronger and more creative solutions and b) finding the humour in a potentially uncomfortable situation can make it easier to talk about.


"It's really too soon to make jokes about things like this."

"People are getting killed by the right wing-extremists. Stop it with the jokes."


My first reaction was defensive: that I didn't see it as a joke. So I had to interrogate: If it's not a joke, what is it? A tongue in cheek statement of fact. Okay- so maybe it is a joke, but one that pokes fun at my own reality rather than being intended to demean anyone else's struggle. On closer reflection though it strikes me that offending language is probably the potential implication that people identify as something else are still 'actually' their biological gender (which, horror of horrors makes it not much better than Mike Huckabee joking "I wish that someone told me that when I was in high school that I could have 'felt like a woman' when it came time to take showers in PE.") I see it now, unintentional though it might have been.

In the end I took the post down, not because I don't still think it's interesting nor because I don't find a grain of amusing truth in it, but because if a picture is worth a thousand words this one is not very clear about what those words are and too open to misinterpretation without context. I think there is a more productive discussion to be had around the issue, and I'm grateful for a circle of acquaintances who can call it out when communication is not effective.

So here are some thoughts and questions off the back of that.

It has been written time and time again that toilets are, if not the last, then at least one of the most visible sites of gender segregation. A binary system that not only favours men over women in terms of provision, but forces a person to publicly declare "I am 'this' or 'that'"and then opens them up to the judgement of society if they do not fit neatly into the prescribed order.

I am generally for de-gendering toilets all together, though I know this in itself is a tricky issue, easier said than done. But it seems to me that in addition to the practicalities of equitable queuing and fluid gender roles (like tradition of providing baby change tables only in the ladies) it provides a more fluid view of gender identity, taking away the need to make a political statement through a simple bodily function. There will always be contexts where, for whatever reason, separate facilities are necessary, but what if these were to become the exception rather than the rule?


It occurs to me is probably safer for me as a cis-gendered woman to use the men's toilet in many places than it is for a transgender man. I have used men's toilets when the ladies was being cleaned, when the line was long, and when I just wanted to see what the inside was like as part of my research. I have occasionally been told off, but never have I felt endangered. It's not an experience I can easily imagine, nor one I would wish on anyone.

I'd be interested to hear feedback from my friends (of all orientations.) What can be done to make restrooms a safe and stress-free experience? What needs to be done (and is already happening) in terms of larger social change? And what can friends and allies do on a practical day to day level? And, if you are willing to share, what particularly good or bad experiences have you had?
Posted by Rachel Erickson at 11:21 PM